Since embarking upon the study of medieval history and literature, my research interests have engaged with the multicultural complexity of the Byzantine world. My research makes salient the interconnectedness of the Byzantine world through written culture, focusing on Byzantium, the Balkans, and Rus/Muscovy, and my broader academic interests lie in the history of political thought and practice, medieval religion, and material culture. Following an early interest in the Eastern Mediterranean as a zone of cooperation and conflict, dialogue and disintegration, my early research focussed on the transmission of Byzantine political culture to the late medieval Balkans (fourteenth to sixteenth centuries) and the role of elite women in cultural patronage, the founding and endowment of monasteries and churches.

During my postgraduate studies at Cambridge my geographical focus shifted to early Rus and the political formation of the Rus polities. The way in which princely rule was externalized in text and visual culture, suggests a Byzantine-inspired framework for expressing local practices that developed from a succession of groups of Germano-Scandinavian or Steppe provenance. The resulting book Ritual and Politics in Early Rus will appear in 2019 and is the first study of the political culture of early Rus from the tenth to thirteenth centuries.

Carrying on from the cross-cultural borrowing of political symbols in ceremony and ritual, I decided to study one particular example of material borrowing: Byzantine imitative coins produced in Rus and Scandinavia. The Byzantine imitation coinages of the northern world highlight the contradictions between written sources and material culture within the region, pointing to different interpretations of the Byzantine symbolic landscape in creating both contingent and distinct political groups within the area that would become Rus. Learn more about my research here: https://www.doaks.org/newsletter/the-princes-coins

At present, I am working on an article for my edited volume entitled The Ottoman Conquest and the Production of Knowledge, which is based on a 2017 conference I organized at Newnham College: https://www.hist.cam.ac.uk/research/conferences/past-conferences/the-ottoman-conquest-and-knowledge-a-transcultural-history. The publication challenges long-held assumptions, prejudices, and misconceptions that the Ottoman conquest of Byzantium and former Byzantine lands signalled the beginning of a ‘Dark Age’ of the production and exchange of knowledge. My contribution explores largely positive attitudes towards the Ottomans in contrast to the Byzantines in Ivan Peresvetov’s “advice literature” drafted for Ivan IV.

My British Academy project Performing History in Early-Modern Russia explores how Muscovite rulers, much like other early-modern and Renaissance rulers, sought legitimacy through intellectual and physical contact with imagined pasts. These new “imaginaries” were developed in Muscovy due to opportunities afforded by expansion and diplomacy. The new cultures of learning that emerged among the literate elite sought to reshape present political practices through a connection with what they saw as a source of legitimacy, such as the Byzantine Empire. The reigns of Ivan III (1462-1505), his son Vasilii III (1505-1533), and his grandson Ivan IV (1533-1584) demonstrated a new set of possibilities for governing this vast territory, many of which were centered on Byzantine notions of rulership and the political and moral authorities of the ruler. A literary elite in Muscovy undertook the copying and compilation of previous historiographic works, amending them to create a seamless link with the Kievan past, to largely by-pass the Mongol period. At the same time, the manufacture of chronicle compilations sought new avenues of political legitimacy, through the interpolation of South Slavonic and other sources, as did the production of historical objects (thrones, crowns, vestments). In Muscovy, the court, the Church, and the literate elite all contributed to rendering accessible Byzantine court culture and notions of power, which were incorporated into Muscovite historiography and, in turn, informed practice.

In the years following my doctorate, I have held fellowships at Newnham College (Cambridge), the French School at Rome, the British School at Athens (Onassis Fellowship), and at Dumbarton Oaks.

My teaching covers the Slavonic world and the Byzantine cultural sphere, ranging from the Balkans to northern Europe from the 10th to 16th centuries. At Cambridge I taught both for the History Faculty and the Faculty of Modern and Medieval Languages and I have lectured at Oxford on the the pre-Petrine period, covering early Rus, the Mongol conquest, and Muscovy.

“Victory and Defeat Liturgified: The Symbolic World of Martial Ritual in Early Rus” in Johannes Pahlitzsch (ed.), Victors and Vanquished. Cultures of War in the Northern and Mediterranean Worlds. Byzantium and European Cultures of War (Mainz: Mainz University Press, 2021), forthcoming.

“In Conversation with Roland Betancourt on his book ‘Byzantine Intersectionality’ ” January 2021 blog post for the New Critical Approaches to the Byzantine World Network at TORCH: https://torch.ox.ac.uk/article/in-conversation-with-roland-betancourt

“The Political Life of Monuments: Hagia Sophia One Month On” September 2020 article in The Balkanist Magazine: https://balkanist.net/the-political-life-of-monuments-hagia-sophia-one-month-on/

“The 1498 Inauguration of Dimitrii Ivanovich in Moscow: A Byzantine Performance?” in Maria Alessia Rossi and Alice Sullivan (eds.), North of Byzantium, East Central and Eastern Europe in the Middle Ages, 450-1450 (Leiden: Brill, 2020), 35-72.

“Orientalism in 2020” June 2020 blog post for the New Critical Approaches to the Byzantine World Network at TORCH: https://torch.ox.ac.uk/new-critical-approaches-to-the-byzantine-world-network#tab-877291

“Nationalist Historiogrpahies of the Slavs and the Balkans” July 2019 blog post for the New Critical Approaches to the Byzantine World Network at TORCH: https://torch.ox.ac.uk/article/nationalist-approaches-to-histories-of-the-slavs-and-the-balkans

“Enthronement in Early Rus: Between Byzantium and Scandinavia” Viking and Medieval Scandinavia 14 (2018): 175-196.

“The Enthronement Rituals of the Princes of Vladimir-Suzdal in the 12th and 13th centuries” FORUM University of Edinburgh Journal of Culture & the Arts 17 (2013): 1-15. 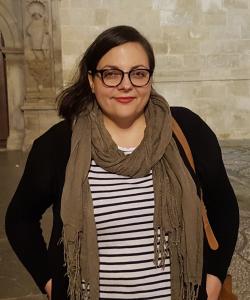