My DPhil looks at modern and contemporary poetry, focusing especially on the Creole and French-language writer from Martinique called Monchoachi.  I’m working closely with Monchoachi’s major poems, including L’Espère-geste (2002) and Lémistè I & II (2012, 2015).  I’m also hoping to better understand how his pensée créole echoes with and reimagines other poetics of relation, presence, and listening.

A little about me: I’m a native of south Louisiana and graduate of Nicholls State University, where I studied English and French and wrote a thesis on Paul Celan.  I also completed an MPhil at Cambridge some years ago, with a thesis on Albert Camus.  Before coming to Oxford, I taught for several years in New Orleans, at Delgado Community College and then Tulane.  I’ve also been active as a translator, and have recently published work by Monchoachi and the Lebanese poet Georges Schehadé.  My work is funded by the Oxford-based Creative Multilingualism initiative, where I am a researcher in World Literature.

Poetry in French and English; Caribbean Literature & Thought; Romanticism and after; Translation. 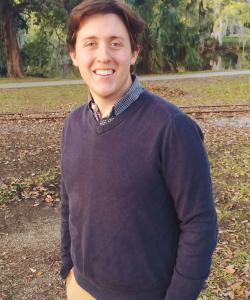