Lucy is a specialist in early modern drama and theatrical literature and culture, primarily in France and Italy. Her first book, forthcoming with Legenda, considers the reception of Italian comedy in early modern France, investigating how sixteenth-century French writers used Italian sources to transform erudite comedy from a scholarly exercise into an autonomous literary genre, which could be employed by humanists both to enrich their culture and to elevate their language. Her book also assesses the ways in which French writers turned Italianate comedy against the Italians themselves later in the century, using their plays as weapons to overthrow the Italian cultural dominance.

As well as completing revisions to her book, Lucy has written chapters and articles on a range of subjects, which include festival culture, early modern and modern humour theory, print culture, and Renaissance poetic treatises. She is also a reviewer for Early Theatre, Modern Language Review, Early Modern Women, the British Society for Eighteenth-Century Studies, and French Studies.

Lucy is a Research Associate in Modern Languages at St Benet’s Hall, and the MHRA Research Fellow at the Centre for the Study of the Renaissance, University of Warwick. She is also an Associate Fellow at Warwick’s Institute for Advanced Studies.

— ‘No Laughing Matter: Superiority Theory and Early Modern Humour’, STVDIO Seminar Series, Centre for the Study of the Renaissance, University of Warwick (February 2020).

— ‘Humour and Heritage: Theories on Comic Theatre in Early Modern France’, Humours of the Past Collaboratory: ‘Humour, History and Methodology: A Multidisciplinary and Trans-Professional Enquiry’, University of Durham (July 2017). 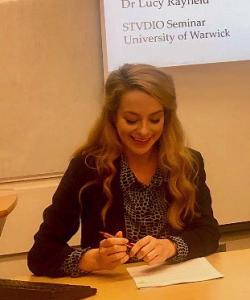