I hold a BA in Humanities with a major in Literary Studies from Universitat Pompeu Fabra and a M.Phil. in German and Spanish from the University of Oxford. I have been visiting student at the Department of Comparative Literature of the University of California, Berkeley, and visiting researcher at both the Institute for Cultural History & Theory (Humboldt Universität) and the Friedrich Schle​​​gel Graduate School for Literary Studies (Freie Universität). During the current academic year, I am DPhil Representative, Graduate Network Co-ordinator, and Co-organiser of the Research Seminars of the sub-Faculty of Spanish.

My DPhil thesis, funded by the AHRC (Arts and Humanities Research Council) and the DAAD (German Academic Exchange Service), contributes to the field of New Modernist Studies by questioning the avant-garde’s narrative of modernism-as-break and its rhetoric of shock. Through a study of Walter Benjamin’s interest in the Spanish Baroque, it underscores the role of repetition, imitation, and practice in the early-twentieth century.  All in all, a version of Benjamin and of modernism will emerge that is no any longer caught between the extremes of exposed creatureliness and extreme shielding.

More broadly, my research interests are in the fields of Literature and Literary Theory, Politics, Philosophy, and the History of Ideas, and particularly where these overlap. 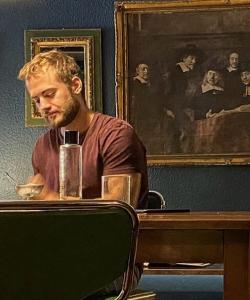 Research: "Calderón, Gracián, and the Rhetoric of Shock in Walter Benjamin’s Baroque"