I’m interested in the intersection of the body and media. My first book, Paris and the Parasite: Noise, Health, and Politics in the Media City (MIT Press, June 2021), builds on work by the French philosopher Michel Serres. He draws attention to the four meanings of “parasite” in French: an uninvited guest, a harmful organism, a mooch, and interference in communication. He argues that these four meanings are intertwined. I apply this idea to urbanism, asking who and what constitute the parasites of Paris. The city has been shaped by what I call anti-parasitic urbanism: the prioritization of cleanliness, order, efficiency and clarity. Through close readings of texts and practices that challenge the anti-parasitism of the city (including graffiti and street art, parkour and urbex, protests and riots), I argue for a radically different approach to urbanism and urban life.

My second book project, tentatively titled Staging Presence, examines how screen culture and new technologies are changing the conceptualization of the body in contemporary French theatre. I’m interested in how and why “being present” has come to be valorised, both in the theatre and in popular culture, and in what people actually mean by presence. Is it a media-technical condition? As in, am I more present for a play if there are no screens onstage? Or is it more to do with attention or intentionality or something else? Does the signification of a theatrical performance change (both for the performers and spectators) if everyone is present for it? The project will look at theatrical performances, acting theory and pedagogy, neuroscience, and French philosophy (Levinas, Derrida, Baudrillard, Stiegler).

Paris and the Parasite: Noise, Health, and Politics in the Media City, forthcoming from MIT Press, 2021. 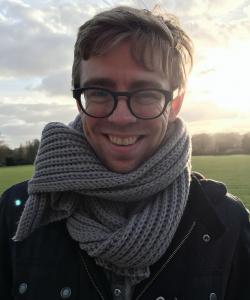