Following an undergraduate double-degree in Politics and Modern French Literature and Culture at SciencesPo Paris and La Sorbonne IV, Paris (2011-14), in 2015, I completed an MPhil in European Comparative Cultures at the University of Cambridge. I then read an MSc in Social Anthropology — with a major in Anthropology of Religion — at the London School of Economics, where I received the Martin Freedman Award for the best Masters thesis of 2016. That year, I was also awarded the Emerging Scholar Award of the Religion and Spirituality in Society Research Network, as a recognition of the potential of my academic work in Religious Studies. I am now studying for a DPhil in French Studies under the supervision of Professor Ian Maclachlan, funded by the Oxford University AHRC Doctoral Training Partnership.

My DPhil thesis examines the way in which four of France’s most original contemporary philosophical voices, namely, Georges Bataille, Jacques Derrida, Gilles Deleuze, and Jean-Luc Nancy, respond to Nietzsche’s proclamation of the death of God. My investigation is set apart from existing scholarship in that it does not wish to demonstrate that these thinkers’ respective engagement with the death of God is ultimately either atheistic or in compliance with a given religious discourse. On the contrary, it strives to take seriously these thinkers’ attempt at thinking in a way that is neither religious nor strictly atheistic. My aim with such a reading is twofold. I hope it will both shed light on the intellectual proximity between thinkers who are still rarely brought together, and lead to the recognition that their respective treatment of the death of God could be of use in understanding problems and issues relating to the so-called post(-)secular condition, how it affects traditional categories of thought and the definitions used in social sciences as well as the impact it has on our way of relating to the world and to each other.

- ‘The Pure Experience of Impurity: Georges Bataille, a Stain in/on the History of French Thought’, Chapter in The Stain in Contemporary French Culture and Thought, published by Peter Lang in its Modern French Identities series. In final editing phase.

- ‘A Post(-)Secular Age? Thinking Religion Beyond Transcendence with Gilles Deleuze’, MHRA Working Papers in the Humanities, with peer-reviewers.

- ‘“What Forced Men to Kill Their Own Kind in Religious Ceremonies”? Anthropology and Metaphysics of Sacrifice in the Work of Georges Bataille and René Girard’, Tropos Journal of Comparative Cultural Inquiry, Vol. 3, No1 (2015), pp.58-66.

- ‘The Modern City as an Oeuvre: Theory and Practice of the Production of Space in Henri Lefebvre’s “Intellectual Activism” and European Street Art’, FORUM Postgraduate Journal of Culture and the Arts, Issue 21, Winter 2015, pp.1-12

As part of a wider commitment to public engagement in the humanities, I work as a freelance journalist for the non-specialist French cultural magazine Le Monde des Religions. So far, I published 14 articles both on their website and in print on various themes related to the philosophy of religion and other religious matters. I am also an Executive Committee member of the ‘European Interfaith Youth Network’ of Religions for Peace, the largest international coalition of representatives from the world’s religions dedicated to promoting multi-religious cooperation for peace.

Other interests include translation — I work as a poetry translator for the English poet Richard Burns, aka Richard Berengarten — as well as interdisciplinary collaborative projects. Along with a fellow PhD student from the theology faculty at the University of Oxford, I am currently co-organising a two-day conference entitled “Thinking with Jean-Luc Nancy / Penser avec Jean-Luc Nancy” (29-30 March 2019). The conference will be a landmark event in English language Nancy scholarship as it will bring together the main voices writing on Nancy in English for the first time. Jean-Luc Nancy himself has already confirmed that he will give a keynote. 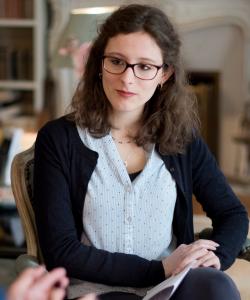 Research: "Faithful Deicides: Contemporary French Thought and Enchantment After the Death of God"