I’m a writer and researcher based in Modern Languages. I’ve worked mostly on German literature of the late nineteenth century to the present, particularly poetry and writing on art. I’m interested in the idea of aesthetic expertise, and most of my work has looked at how people have understood the skills and knowledge required for an engagement with works of art, literature or architecture. My first book dealt with how to ‘read colour’ in Modernist poetry. I’m currently interested in the problem religious belief in art and literature poses to the secular imagination.

My teaching at Oxford covers the modern period (defined in this case as 1770 to the present), particularly poetry and film, as well as German-English translation. I teach or have taught Rilke, Fassbinder and Petzold as prescribed authors (Paper X), and have supervised work on translation theory and Weimar art magazines as well as modern and contemporary poetry. I also teach on the MSt in Film Aesthetics.

I helped set up the Expanding German Studies project which calls for more and better thinking about what is on the UK German Studies curriculum and how it is taught.

My first book, Reading Colour (Peter Lang, 2019) is about colour in the poetry and prose of Stefan George, Rainer Maria Rilke, Wassily Kandinsky and Else Lasker-Schüler, and uses colour language as a way to think more about how poetic language works. It has been reviewed here. Beside those dealt with in the book, I’ve worked on a range of poets – Arno Holz, Paul Celan, Hugo Ball, Dom Sylvester Houédard, Edwin Morgan, C H Sisson, I A Richards – and poetry-related topics – translation, visual and experimental poetry, the relation of poetry and theology.

My current project looks at the role of religious belief and unbelief in literary and art criticism from the late eighteenth century to the present. I’m also writing an essay on conversion in the novels of Theodor Fontane (another art critic). My focus is on the difficulty religious belief poses to the imagination and method of the secular critic. I’m interested in how this difficulty plays out in teaching, for which I have organised workshops and round tables (on alterity, in 2019, and on difficulty, in 2021).

I have a wide range of interests outside of German literature. I’ve written most recently on the ‘obscurity’ of other minds in the English novelist Barbara Pym, the politics of sex, and the nature writing of Helen Macdonald. For more about my non-academic writing, see my website. 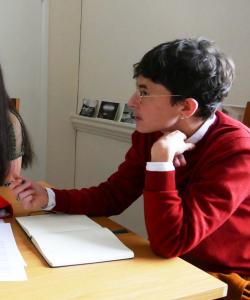