I situate my research broadly at the intersection of contemporary literature, postcolonial studies, gender studies, and the medical humanities. My current research project offers the first study of the menopause as a literary trope in fiction, auto-fiction, and poetry by selected writers in the twenty first century. This project will show that women’s writing on the menopause emerges as a critical counter-narrative to heteronormative and ageist rhetoric and highlights the lack of discourse around the menopause’s disabling physical and mental effects and the impact this has on women’s health. While a large proportion of literary engagements with the menopause centres on the lives of women who are white, cis gender, and heterosexual, there is also a growing body of texts that highlight the experiences of women of colour, Black women, queer women, non-binary and trans people, disabled women, as well as women who go through a medically induced menopause. To this end, the project proposes a panoramic approach with regard to its primary sources to demonstrate the ubiquitous nature of the menopause as a literary trope in twenty-first century literature while focusing on its strongest presence in fiction, auto-fiction, and poetry.

I am also currently completing my first monograph which is based on my PhD research. My doctoral project “Imagining a Feminist Supermodernity: Non-Places in Contemporary British and Canadian Women’s Writing” (2020) is the first major reconsideration of Marc Augé’s theorisation of supermodernity and its non-places (2008) through an intersectional feminist lens. It intervenes in existing discourses on literary representations of transnationalism and mobility by locating a body of works by women writers around the turn of and in the twenty first century.

I teach German language and literature to undergraduates, including Paper I, various seminars for second years (Germany and Austria as postcolonial nations, transnational literature, contemporary women writers, Afro-German women’s writing), as well as preparing finalists for their oral exam and the Essay in German.

Together with Barry Murnane and Miriam Schwarz I also co-founded “Decolonial Discourses & German Studies”. We established this project to grapple with the colonial legacies of German Studies within Oxford and the UK. As a forum, it brings together internal and external speakers, activists, and writers with events open to the public

[invited] “’Stampede or else’: Spectacle, Rodeo, and Cowgirls in Aritha van Herk’s Stampede and the Westness of West.” Out of Bounds: Countercultures, Extreme Sport, and Transgression in Canadian Sport Lit, eds. Angie Abdou and Jamie Dopp. Athabasca University Press, forthcoming 2022.

“The Embassy of Cambodia”. The Literary Encyclopedia. First published 12 June 2017.

Boehmer, Elleke. The Shouting in the Dark (Sandstone Press 2015). In: EACLALS (The European Association for Commonwealth Literature and Language Studies) Newsletter, 2015, p.13.

“’Rain can be all these different things’: Watery Embodiment in Carellin Brooks’ One Hundred Days of Rain”, Canada and Beyond V: Bodies of Water, University of Huelva, Spain (June 2018)

“Home is where the Wifi connects automatically…Notions of Home in Contemporary Travel Literature and Culture”, Krísis Symposium, Nottingham, UK (October 2016)

“’The future is menopausal’: Un/Learning with Feminist Menopause Imaginaries”, The Poetics and Ethics of “Learning With”, online/Norwegian University of Science and Technology, Norway (March 2021)

“From Londinium to Londolo and Back Again: Mapping the Empire’s Centre in Bernardine Evaristo’s The Emperor’s Babe and Blonde Roots”, Post-Empire Imaginaries, University of Berne (May 2012)

“’Sometimes it was as if I were back there and as if England were a dream’ – Colonial Memory and the Colonial City in Jean Rhys’s Voyage in the Dark”, The Postcolonial City, University of Leeds (Feb 2012)

“’You cannot imagine how much I long to have a room or two, a cave of my own’ – Rooms in Jean Rhys”, Time and Space in Contemporary Women’s Writing, University of Hull (Sept 2011) 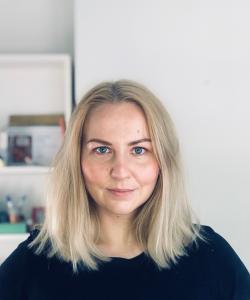