RESEARCH
Originally hailing from the Netherlands, I am a Marie Skłodowska Curie Fellow and post-doctoral researcher at the Faculty of Medieval and Modern languages. My PhD in English Literature I received from Umeå University, a Swedish city 300 km below the Polar Circle; my dissertation traced the evolution of Julian of Norwich’ literary thought. I then was employed as Senior Lecturer (the Swedish equivalent of an associate professor) in English Literature by Mid Sweden University in Sundsvall, another little-known city in the north. My research considers the intersection of northern European women’s writing, medieval literary theory, popular religion, visual and material culture, and folklore. Parallels between medieval literature and later literature form another area of interest, as do cognitive approaches to literature and research-by-performance explorations; at the IMC in 2019, some friends of mine and I produced and staged a play based on Middle Dutch Sister-Books, female-authored collections of women’s biographies. A recent article of mine read Julian of Norwich alongside cognitive studies, neuroscience, and knitting.

My MSCA-IF post-doctoral project is titled “Women Making Memories: Liturgy and the Remembering Female Body in Medieval Holy Women’s Texts”. This two-year project started on the first of September 2019 and receives funding from the European Union’s Horizon 2020 research and innovation programme under the Marie Skłodowska-Curie grant agreement No 842443.) The project centres on six vernacular (auto)biographies and visionary texts by devout women from medieval Europe. These texts all date from 1300 to 1500, the era in which women’s vernacular theology flourished. They originate from the European regions now known as the Netherlands (the Diepenveen Sister-book), Belgium (Mechtild van Rieviren’s visions), Germany (a Middle Low German prayerbook), Switzerland (the Katarinentaler Sister-book), and The United Kingdom (Julian of Norwich’ A Revelation of Love, and The Book of Margery Kempe). The project starts from the observation that devout women from medieval Europe knew the words, sounds, sights, and movements of the liturgy (the Divine Office and Mass) by heart: references to sensations and gendered discourses produced by the liturgy abound in their texts. The proposed research therefore situates these works in the context of the liturgy and memoria, the medieval art of remembering. In the Middle Ages, memoria was considered essential for moral behaviour and literary invention; medieval devout women deployed memory arts daily when meditating. The liturgy indirectly taught an art of memory as well. Like secular memoria, this art of memory involved mind and body. I argue that these medieval women writers strategically appropriate liturgical memoria, that is, what and how the liturgy taught women to remember. By doing so, these texts imprint a particular memory of the text and subject on the reader’s mind and body and rewrite the liturgy’s form and content, providing them with new resonances. The project combines close-reading and historical contextualization and examines these six works through the prism of medieval thought on embodied cognition. It thus seeks to uncover how early women authors transform liturgical memory arts, and how these holy women thus respond to and interrogate the liturgy’s numerous discourses on the body, gender, and self and Other. This international, comparative analysis of texts in Middle English, Middle Dutch and Middle High and Low German reveals European parallels and interactions between texts and writers, ultimately amplifying medieval women’s voices and illuminating their significance to Europe’s cultural and spiritual heritage.

MONOGRAPHS
Julian, God and the Art of Storytelling: A Narrative Analysis of the Works of Julian of Norwich (1342- 1416). Umeå Studies in Language and Literature 32, Umeå University, 2016. (Dissertation.) Also available from http://urn.kb.se/resolve?urn=urn:nbn:se:umu:diva-126401

SCHOLARLY PUBLICATIONS
“Was Julian’s Nightmare a Māre? Julian of Norwich and the Vernacular Community of Storytellers.” Medieval Anchorites in their Communities. Ed. Liz Herbert McAvoy and Cate Gunn. Woodbridge: Boydell and Brewer, 2017.

“A Knot So Subtle and So Mighty’: On Knitting, Academic Thinking and Julian of Norwich.” Cognitive Sciences and Medieval Studies. Ed. Juliana Dresvina and Victoria Blud. University of Wales Press. Accepted for publication.

“From Riches to Rags: Conversion Narratives and Mnemonic Strategies in The Book of Margery Kempe and the Sisterbook of Diepenveen.” Medieval Feminist Forum: A Journal of Gender and Sexuality. Under review. 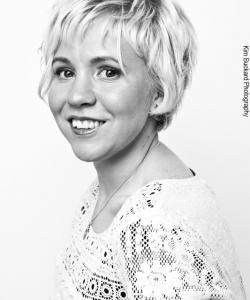