A Companion to Portuguese Literature

This companion volume offers an introduction to European Portuguese literature for university-level readers. It consists of a chronological overview of Portuguese literature from the twelfth century to the present day, supplemented by substantial essays centred on major authors, genres or periods and a study of the history of translations. It does not attempt an encyclopaedic coverage of Portuguese literature, but provides essential chronological and bibliographical information on all major authors and genres, with more extensive treatment of key works and literary figures, and a particular focus on the modern period. It is unashamedly canonical rather than thematic, in its examination of central authors and periods, without neglecting female writers. In this way it provides basic reference materials for students beginning the study of Portuguese literature, and for a wider audience looking for general or specific information.
Notes:

'Portuguese literature is neither invisible nor absent from the international landscape. We just need to look for it more attentively.' Patricia Odber de Baubeta's closing remark in her survey of English translations of Portuguese literature also functions, albeit perhaps unintentionally, as the best justification for the recently published volume on Portuguese literature. Irrespectively of how remarkable a publication it is in terms of selection of texts and contributions, and in spite of that, its greatest value is arguably its groundbreaking character, in providing Portuguese literature with the visibility and attention it both longed for and required. Students (undergraduates and postgraduates), lecturers, and interested readers, particularly those who do not speak the language, now have access to an essential tool for an approach to Portuguese literature which is both rigorous and accessible, insightful, and informative by a high-profile group of contributors.

The volume, proposing to be a 'friendly and accessible guide', certainly does correspond to what it set out to be: neither a dictionary nor a history, rather a volume providing essential information on key authors and works which covers a time span of approximately eight hundred years. Its 'unashamedly canonical' approach can certainly be understood, given the proposed nature of the volume, and it will prove to be particularly useful for teaching purposes (whether to follow or to challenge such a canon), while it also does not fail to provide valuable historical and literary contextualization for those interested in authors who, for obvious reasons, are not featured in the book. The selection of authors and works is representative, but even periods which, for one reason or another, do not feature canonical writers as such, or whose writers are sacrifi ced to the necessarily selective logic of a companion, are adequately addressed. Nevertheless, given the comprehensive character of the volume, albeit necessarily selective, the interested reader can be confident of finding crucial information on whichever period, genre, and related authors s/he may be interested in.

The piercing and thought-provoking chronological overview provided by Helder Macedo alone is a reason for acquiring the volume, as it also sets the tone for a standard of quality in the ensuing chapters which will most certainly not disappoint the most demanding of readers, as it articulates the necessary introductory character with perceptive and innovative observations. The featuring of suggestions for further reading is welcomed in a volume that has abstained from making extensive use of references and of traditional Portuguese critical terms, making it a very accessible, as well as enthralling, read. That the volume ends with a survey of translations into English is both practical and laudable.

Fortunately, particularly for most advanced readers, the volume caters for more than it sets out to, as most chapters acknowledge but also supplement the 'humanist tradition' focused on 'individual achievement' which is central to the volume. Most chapters will concentrate on one particular author, but will nevertheless address other contemporary authors and works, akin or contrasting, which guarantees that a balanced view of different periods is achieved. Clive Willis's juxtaposition of The Lusiads with other works of Portuguese expansion provides a suitable example. Even though some chapters logically provide almost exclusively historical and literary contextualization, this nevertheless proves essential for the understanding of Portuguese literature as a whole, and some refreshing and innovative insights as to what concerns the Portuguese literary milieu (and what has been traditionally left out in the study of the period) are expounded there. Vanda Anast&aacute;cio's chapter on the eighteenth century is a case in point. Helena Carvalh&atilde;o Buescu's analysis of Almeida Garrett as founder of modern Portuguese literature is a masterfully woven argumentation, with significant and thought provoking implications, but one which is nevertheless delivered in elegantly accessible style.

If the enlightening views on Lu&iacute;s de Cam&otilde;es and sixteenth-century lyric poetry, not to mention the famously neglected Cantigas, are certainly welcome, the last three chapters of the book, concentrating on literary production under the New State dictatorship (Phillip Rothwell), women writers up to 1974 (Hilary Owen and Cl&aacute;udia Pazos Alonso), and writing after the revolution (Mark Sabine and Claire Williams), are something to be celebrated.

The critical reassessment presented in these chapters, particularly in the two final chapters, certainly does more than simply introduce the reader to authors and works in Portuguese literature, but rather addresses some of the fundamental contradictions and forces at play in modern and contemporary Portuguese literature, without neglecting the informative character of the volume. 'Writing after the Dictatorship' immerses the reader in the intricate web of relations and movements of cultural production, a feature which will make it extremely valuable for anyone trying to cope with the understanding of contemporary Portuguese fiction, providing a comprehensive and overarching vision which provides a strong conclusion to this analysis of authors and works. As an important by-product, this volume lays the ground for new teaching and research, which have often suffered from the lack of an accessible yet rigorous anthology, apart from providing a valuable tool for those who have a comparative interest in Portuguese literature but without knowledge of the Portuguese language. Even while acknowledging the additional importance of this volume as a first step towards Brazilian and African literature (which, as the editors rightly claim, demand separate treatment), one must stress the importance it will have for the study of Portuguese literature and 'Lusophone' literature in general, given the new challenges that lie ahead. While the main aim of A Companion to Portuguese Literature ?" to provide a literary and historical contextualization and an introduction to Portuguese literature ?" is supremely achieved, the volume would benefit from more frequent instances of textual analysis. The chapters on Medieval Galician-Portuguese lyric (Rip Cohen and Stephen Parkinson) and on lyric poetry in the sixteenth century (T.F. Earle) are fine examples of how stimulating this articulation between text and context can be. The importance of this volume for the present and the future of Lusophone studies, for students and scholars alike, cannot be overestimated. 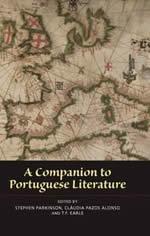