The Sermon von Ablass und Gnade (Sermon on Indulgences and Grace) is a seminal text for the Reformation: it is the first vernacular statement of Luther’s views on the question which led to his break with Rome; the first printed work of his to reach a mass audience; and the first example of the direct, arresting style which became the hallmark of his German writings. The work hit the market 500 years ago, in the second half of March 1518, five months after the posting of the 95 Theses, and within three years at least 24 editions had been printed in various parts of Germany and Switzerland. Our volume is based on two of these editions, copies of which are held in the Taylor Institution Library, and presents a guide to the theological, historical, material, linguistic, and stylistic importance of this work. 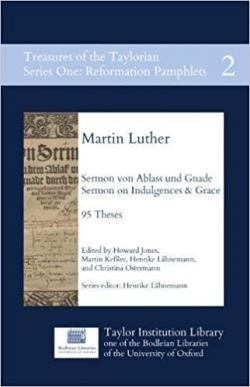