Exile, Displacement, Migration
Series:
Iberian and Latin American Studies
Author: Ben Bollig
This book is the first study of the link between exile and poetry link in modern Argentina. Throughout Argentina’s history, authors and important political figures have lived and written in exile. Thus exile is both a vital theme and a practical condition for Argentine letters, yet conversely, contemporary Argentina is a nation of immigrants from Europe and the rest of Latin America. Poetry is often perceived as the least directly political of genres, yet political and other forms of exile have impinged equally on the lives of poets as on any group. This study concentrates on writers who both regarded themselves as in some way exiled and who wrote about exile. This selection includes poets who are influential and recognised, but in general have not enjoyed the detailed study that they deserve: Alejandra Pizarnik, Juan Gelman, Osvaldo Lamborghini, Nestor Perlongher, Sergio Raimondi, Cristian Aliaga, and Washington Cucurto. 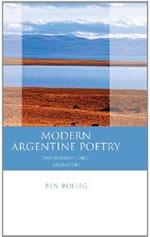