The Spanish Ballad in the Golden Age

Collections of traditional Spanish ballads were made in the early seventeenth century; some recorded directly from singers, others reworked by educated poets. So popular were these that Court poets composed ballads of their own. Most Spanish poetry of the sixteenth and seventeenth centuries circulated in manuscript among a small coterie of wits and fellow poets, and it often contains references to contemporary events and people, sideswipes at institutions and individuals, and allusions to other writings of the time. The modern reader has to know about the people and events criticized and lampooned, and everything from municipal by-laws to contemporary painting can prove helpful. The traditional popular associations of the ballad also led to many poets combining in their poems the language of the street alongside that of polite society and the schoolroom. This volume discusses some of the problems encountered by anglophone students and teachers of literature when they turn to the Golden-Age ballad and offers informed guidance on how such poems might be read. The nine poems discussed have been chosen with such difficulties in mind and a strophe-by-strophe prose translation is provided for each, followed by a detailed critical analysis. Edited by NIGEL GRIFFIN, CLIVE GRIFFIN, ERIC SOUTHWORTH and COLIN THOMPSON Other contributors: OLIVER NOBLE-WOOD, JOHN RUTHERFORD, RONALD TRUMAN. All of Oxford University. Reviews Undoubtedly, this is a meticulously researched work. Great effort has been put forth consulting Covarrubias, the Diccionario de Autoridades, and each poet’s oeuvre to unravel the seemingly endless double entendres, bringing to light the subtle nuance of each word, making this a valuable resource for those interested in the Spanish ballad. HISPANIA It is impossible to come away from this book without a deeper appreciation of the skill of Lope, Góngora, Quevedo and Polo. TIMES LITERARY SUPPLEMENT 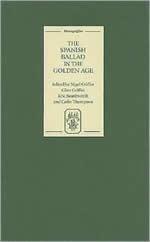