The Ilchester Bursary in Memory of Anne Pennington

Anne Elizabeth Pennington (1934-81) read Russian at Lady Margaret Hall and taught Russian and Slavonic Philology there from 1959 to 1980, when she was elected to the Chair in Comparative Slavonic Philology (see her entry in the Oxford Dictionary of National Biography). Her scholarly activities ranged from the study of 17th-century Russian language, to which she made a major contribution with her commentated edition of Grigorij Kotošixin’s description of Muscovy, to music manuscripts from medieval Moldavia. She was the prime mover in producing a catalogue of Cyrillic manuscripts in British and Irish collections, which was published a few years after her untimely death in 1981. She had a particular interest in the languages, music, poetry and costume of south-eastern Europe, and drew on her knowledge in this area to produce acclaimed translations of folk poetry and of modern poets such as Vasko Popa and Blaže Koneski, in collaboration with Peter Levi, Andrew Harvey and Ted Hughes. Her collected letters to Vasko Popa were published in 2010, and her translations of Popa’s poetry appeared in a second edition the following year.

More information about Anne Pennington’s work can be found on SOLO (Search Oxford Libraries Online). Click on SOLO, type “Anne Pennington” into the Oxford Collections box and click the Search button to start browsing her work. 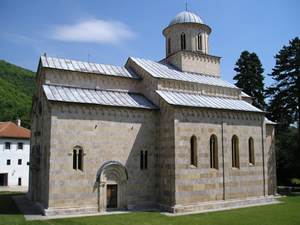 In 2011 the sub-faculty of Russian and other Slavonic languages was offered a donation of £3,000 to be used in memory and honour of Anne Pennington; in response to appeal, additional gifts raised this sum above £11,000. The money has been added to the Ilchester Endowment, bequeathed to the University in 1860 by the Earl of Ilchester to encourage the study of Slavonic languages, literature, and history (see Slavonic Studies at Oxford: a brief history), and the income from it is to provide an annual bursary for undergraduates who need to attend a course in a South Slavonic language in order to take it as a final-year Paper XII option.

The number of students opting to study South Slavonic languages has grown recently: three finalists took Croatian in 2007 and two in 2014; two have taken Serbian each year in 2009, 2011 and 2012; the first student to get a Class I degree (2009) after starting Russian ab initio at Oxford took an option in Bulgarian, and three more have taken Bulgarian since then. Here are some of their stories.

Eithne Bradley read Spanish and Beginners’ Russian at University College, 2005-9. She says: ‘I thoroughly enjoyed learning Serbian / Croatian because it opens up a fascinating part of Europe. I ended up travelling quite extensively through Montenegro and Croatia, though I ran out of time before I could get to Bosnia. Paper XII is unusual in that it combines a linguistic aspect and the acquisition of another language, not to mention exploring the history and culture of the country or region. Having said that, it is certainly not an easy option!’

Eithne is now a conference interpreter at the UN in Geneva. She does not use Serbian in her day-to-day work, but she says that the EU is always on the lookout for people with the languages of the new EU member or accession states.

Katie Nield read French and Russian at LMH, 2008-12. Like Eithne Bradley, she took Paper XII in Serbian, and they became friends in Geneva where they both work as interpreters. After graduating from Oxford Katie went to Moscow for six months or so, before moving to Bath for the MA in Interpreting and Translation. She passed the UN accreditation exam in January 2015 and now works mainly at the UN, but also at other organisations, using both Russian and French (Serbian comes up less often). The meeting topics vary hugely — latest on cybersecurity.

Peter Blackstock read German and Beginners’ Russian at Magdalen, 2005-9. He says: I’m very glad that I chose to take the Paper XII in the Structure and History of Bulgarian. I didn’t have any knowledge of or particular interest in Bulgaria before taking this option, but found the whole experience fascinating and very rewarding. My five weeks in sunny Plovdiv, eating delicious quasi-Mediterranean fare in bright summer sunshine were rather different from the nine months I spent in wintry Yaroslavl’, Russia — it was eye-opening to truly see the geographic and cultural range of the Slavonic languages. Spending time in the country gave me an intermediate level of spoken Bulgarian, and then studying the linguistic history and contemporary usage of the language was extremely edifying. I came out of the experience with a reasonable working knowledge of the country’s history, culture, linguistics, and language, and a view on to a part of the world that was totally unknown to me previously. I highly recommend the Paper XII in another Slavonic language, it’s an ideal way to broaden your linguistic horizons. And I have even found one or two opportunities to use my Bulgarian in my work as an editor at a publishing house, although I am still in search for the Bulgarian version of a Hilary Mantel or Jonathan Franzen. Watch this space!’

Ed Hicks read Czech and Russian at University College, 2008-12. He says: ‘Serbian was one of the most challenging, but by far one of the most rewarding papers which I studied at Oxford. I chose to study Serbian because I wanted to add another language to my list of Slavonic languages and because I wanted the opportunity to visit a country which I had not been to on the year abroad. To this end, I spent a hectic six weeks in Belgrade, Novi Sad and Southern Serbia, enjoying the hot Balkan sun, rakija-fuelled adventures and a bit of studying too. Adding another language at such short notice is difficult, even if encouraged by your knowledge of Russian or another Slavonic language; nonetheless, the experience is eye-opening. My increasing appreciation of Serbian linguistics helped me understand Russian and Czech better as I sought to compare these languages when writing essays; learning Serbian was thus another way of consolidating knowledge for other papers. Furthermore, Serbian has proved to be a useful language to learn: being one of the very employees in my firm in the City of London who can speak an Eastern European language, I have become an important member of the team and have had the opportunity to work on high-level projects early on in my career, despite being relatively junior. Thus, for career advancement, academic satisfaction and year-abroad fun, I have Serbian to thank!’