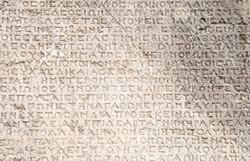 Linguistics studies the structure and history of languages; the meanings underlying instances of language use; how languages are related; how children learn language; what goes on when people are speaking; what features are shared by all languages; why languages differ; how language is used in literature, the media and by various social groups; what happens to language abilities when the brain is damaged by stroke or injury; whether computers will ever be able to understand language —  and many other topics.

Within the Modern Languages Faculty, you can study Linguistics in combination with any of the languages offered, except, currently, Czech and Polish. You do not need to have studied any Linguistics or English Language before.

Please note that this site deals with Linguistics for Undergraduates only. Those interested in graduate studies in Linguistics should visit the site at http://www.ling-phil.ox.ac.uk.

Oxford offers facilities for the linguistic and philological study of European Languages unmatched anywhere else in Britain, and thriving units in General Linguistics and Phonetics. These are seen to best advantage in the new degree course, which combines the different elements to give a mutually reinforcing package of theoretical study of what human language is and how it works and more detailed study of specific issues of language structure and change applied to the language you are studying. Even if you only wish to make linguistics a small part of your overall degree, you will still find a wide range of options available, allowing you to concentrate on those areas you find most exciting.

A new degree course has recently been established in Linguistics with a Modern Language. It is available with all the languages offered by the Modern Languages Faculty, except, currently, Czech and Polish. The course normally lasts four years, including a year spent abroad in a country where the foreign language is spoken, although it may exceptionally be taken in three years. It consists of a one year introductory course, leading to the Preliminary Examination, and a two year Honours course, with the year abroad coming between the second and Final years.

The first year course has three components: Grammatical Analysis, Phonetics and Phonology and General Linguistics. The emphasis is on introducing the basic concepts and methodology of General Linguistics, although some close reference is made both to English and to the modern language being studied. At the end of the year, there are three-hour exams in each of the three component areas.

During the first year, students also prepare for the Preliminary Examination in their language, which involves two examinations in a language, and two in literature.

The Honours course interweaves more advanced General Linguistics with detailed linguistic study of the language. Students take four or five linguistics units. These include obligatorily one unit on Linguistic Theory, and two on the language, generally one on its historical development and one on the analysis of its current structure. Students then choose one or two other options, drawn from a wide range of areas covering theoretical questions, historical developments and problems in the description of languages as they are today. They take examinations in all these units in their final year. These are generally conventional three-hour exams, although some of the options may be assessed by other means.

At the same time, students will follow courses in their languages, leading to examinations in translation, essay writing, oral proficiency and two or three literature options.

Doing linguistics papers without taking the Linguistics + a language degree

If you do not wish to opt for the combined degree course but are still interested in doing some papers in Linguistics, a wide choice is available to you, with some variation according to whether you are doing one or two languages.

If you study one language on its own you will take some compulsory Linguistics papers in your first year, unless you apply to do the French or German sole course. The first year course for a sole language other than French and German is therefore identical to that of students doing the combined course. After that, they are only obliged to do one linguistics option, related to their language (usually the history of the language, or the description of its current structure) but they may take up to four linguistics papers. (Though anyone who wishes to do that many should probably be doing the combined course anyway!) The same units are available to single language students as to those doing the Linguistics + a language course, that is: one on Linguistic Theory, two on their language and options on various aspects of theory, linguistic history and linguistic description. However, single language students may not choose more than one of these options. Examinations on these units are generally conventional three hour papers, although some of the options may be examined by other means.

Students doing two languages are deprived of the option of doing linguistics in their first year. After the preliminary examination, they may choose up to three linguistics units, although they do not have to take any. The units available to them are: units concerned with their languages (generally two per language are available, typically one on the languages history and one on the analysis of its current structure) and optional units on theoretical questions, linguistic history and linguistic description. Examinations on these units are generally conventional three hour papers, although some of the options may be examined by other means.

Linguistics at Oxford is taught through a combination of lectures, classes and tutorials. Lectures are an essential feature of the entire course, and you would be expected to be attending several a week. Also each week, you would be expected to produce a written assignment, most often an essay, but sometimes a piece of analysis or other practical task, to be discussed with a tutor. This work forms the basis for work in classes (of between 3 and 6 students) in the first year and for tutorials (where a tutor spends an hour with just one or two students) in the rest of the course.

How to get further information and apply

Further information is available from the main University Admissions Office at

or from individual colleges. Applications must be made to colleges; please consult the Oxford Undergraduate Prospectus for further details, and note the closing date!

If you can support us, please donate through the Campaign for Oxford.