Hilary Term 2020
Marina Warner
Professor Dame Marina Warner FBA, President of the RSL, read French and Italian at Oxford in the 1960s. This is the speech she gave at the Goncourt Royaume-Uni ceremony on December 13 2020. 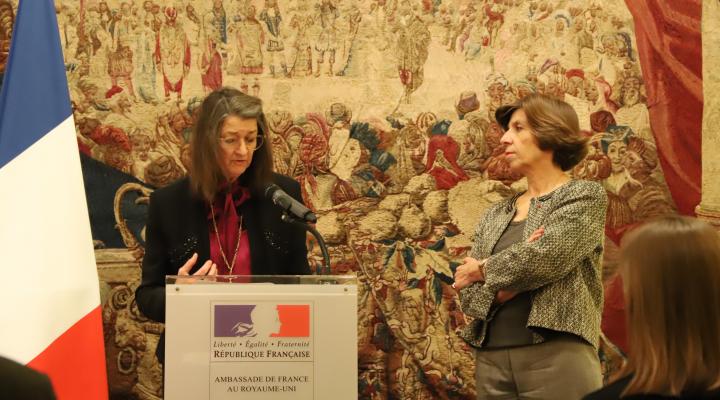 When the date of this event was fixed, nobody knew that a crucial election would be taking place in the United Kingdom. In the light of what has happened, I feel numb and frightened for the future. I am therefore proud to be marking a moment of Franco-British solidarity, and to be here on French soil in this country. The spirit of European culture, built on the common ground of imagination and long intertwined histories is under strain, but shall not be broken. Now, through the good offices of Her Excellency the Ambassadrice of France, and my colleague and friend Catriona Seth, who holds the Maréchal Foch Chair of French Literature at Oxford, the prix Goncourt des Etudiants has arrived in this archipelago.

The Goncourt Prize committee established a forum for younger readers in the wider public thirty-two years ago – The Goncourt des Lycéens, and since then the programme has spread to twenty countries.  In the Francophonie and beyond – from Morocco, Lebanon to Poland and Rumania – and now here for the first time, young people have judged their Goncourt winner. The Anglosphere has been a Johnny-come-lately to the party — we who still live here need to pay closer attention to the way things are done in France. Arts and letters, culture and intellectual thought have their own momentum, whatever leaders are up to.

While many of us are Francophiles through and through, recent government policy in England has led to disastrous decisions in our schools – not to speak of other spheres. For example, the teaching of a second language became optional several years ago, causing widespread shrinkage across state education at every level. It falls to other institutions and individuals to resist. The Royal Society of Literature, of which I am President, with Lisa Appignanesi, the Chair of our Council, has been involved in widening discussion of books and enlarging the community of readers – in l916 we established an Entente committee to keep open channels with writers abroad, in spite of the war. The Goncourt des Etudiants, with representatives from universities in all four nations in the UK   to debate contemporary French writing, could not be more valuable and timelier.

The founders Edmond and Jules de Goncourt, were inseparable and together they wove a web of social connections through the literary and artistic worlds of the l9th century: they founded a salon called the grenier, the attic, in their villa in Auteuil, and they held gossipy literary dinners at Magny’s restaurant. Jules died 26 years before Edmond, but Edmond lived to keep his brother’s flame burning, and left his estate to found the Académie Goncourt and the famous prize. With its circle of ten judges, known as les Dix, and its monthly conclaves over a splendid lunch in a Parisian restaurant, the prize continues to live up to the style set by the Goncourts. The judges even have their own individual engraved set of silver gilt cutlery — high aesthetic and literary standards must not slum it. The winner’s award – a token 10 Euros — adds an ultimate touch of aristocratic sprezzatura. We are fortunate we are caught in the afterglow of this tradition here in London tonight. In our coarse, rosbif way, we can try to learn.

The four writers on the short list we have been reading resonate with its progenitors’ writings in ways that tell us something about the role of fiction today. The writers examine humanity up close, they assume an accelerated, globalised, and ruthless world, and show no respect for conventional pieties: Amélie Nothomb’s Jesus is human down to his sexual impulses. Above all, these books explore their narrators’ minds, living in the voice on the page as if present in person in scenes which have truly taken place. These are fictions which read like truth statements, chronicles, memoirs, true confidences imparted to us by the authors. In the case of Jean-Luc Coatalem, La Part du fils, and Olivier Rolin, Extérieur Monde, the authors are excavating family histories and supplying missing material from imagination. But even Nothomb’s Soif, written in the first person of Jesus himself no less, as he undergoes his passion and crucifixion, sounds as if she’s there, and it’s all happening to her. Jean-Paul Dubois, who carried off the prize in France this year in the main competition for his wide-ranging novel, Tous les hommes n’habitent pas le monde de la meme façon, doesn’t frame his story as personal, yet he too manages to make it sound altogether autobiographically persuasive, from a Protestant church set in the wilds of Skagen to asbestos mines in Canada and the details of maintaining a condo building. A reality effect is what the writers want and what they achieve.

In an era vexed by unstable reports, this reminds us tellingly of the supreme power words have to conjure solid illusion: there would be less of a problem with ‘fake news’ if there was more understanding of literature’s intrinsic craftiness. Remember, Einstein said, ‘if you want to make a child intelligent, read them fairy tales, if you want to make your child more intelligent, read them more fairy tales.’ He meant those stories hold age-old wisdom, but it is also the case that while fiction wises us up to the world through what it shows us, more fiction wises us up to the play of invention in all records and representations. Amélie Nothomb, living inside the mind of Jesus offers us a moving as well as mischievous picture, but we only know it didn’t happen in that way because we know a little about Jesus already.

The Goncourt Brothers set the mode of immediate, high-res capture through their most enduring work, their Journal, begun in 1851, written in a single voice with four hands, as it were like a piano duet. Every night, the brothers, returning home from the innumerable parties, plays, and other events they attended, set to telling the story of what they remembered had happened: they were catching their circle sur le vif – Edmond declared they wanted ‘to bring our contemporaries to life for posterity in a speaking likeness, by means of the vivid stenography of a conversation… those little signs of emotion that reveal a personality…’ (Barnes, The Man in the Red Coat, p 78). After Jules’s early death in l870 at the age of 40, Edmond persevered in honour of his brother. Julian Barnes — like many others before him — has drawn on their extraordinary record of Parisian life in his recent book The Man in the Red Coat. He admires the way the Journal draws up a portrait of the age which ‘is often scabrous… richly detailed, funny, gossipy and blatantly unfiltered.’

You will have felt how novelistic these goals are, what explorers of human character and social tensions the Goncourts were. They were raconteurs du présent – narrators of the present, practising their ‘sténographie ardente’ . As evidence or testimony, the Journal has to be taken with a pinch of salt; as amusing, worldly insight, it has few rivals. Significantly, Edmond declared, ‘L’histoire est un roman qui a été, le roman est l’histoire qui aurait pu etre. (History is a novel that has taken place, the novel is history that might have.) (Journal, 24 Nov. 1861) The pair were documentary realists working in the tradition of l9th century scientific naturalism, but they recognised that what someone experiences as real is not the same as reality. Barnes comments, ‘Everything they recorded was truthfully done, even if what they had been told was not necessarily true.’ (Barnes, p. 77).

The French novel has been uniquely rich in nuanced social portraiture – I can’t be the only reader who thought, on first encountering Les Liaisons dangeureuses, that it was all absolutely true.

Prize short lists act as lights on the foreshore as we readers drift through a blizzard of press releases and publishers’ blurbs, booksellers’ displays and internet demands. The select few judges who draw them up are key to these choices – their power is huge, their views a matter of individual taste. To hear more opinions, other voices, is vital to widening the ongoing conversation about books in different societies and milieux. Reading is a social activity – it is too often forgotten that talking about a book is part of the pleasure — disagreeing or otherwise (even when you haven’t read it). We were fortunate enough to hear some of those voices earlier this afternoon. Two students each have come from Belfast, Cardiff, St Andrews, Aberdeen, Warwick, Oxford and Cambridge; they discussed the books on the short list in groups in their universities and reported incisively:   Coatalem’s La Part du fils was chosen by Nayden Tafradzhiyski and Chiara Costantini from Aberdeen.  They praised the breadth of the issues raised through the spectral figure of the grandfather who disappeared. First a soldier in the French colonies, then a Résistant, he embodies many aspects of French history, they felt, and the novel’s communication of loss and silence is powerful and timely. The other contingents were unanimous in their choice of Dubois’ Tous les hommes… (and Aberdeen was happy to concur in this verdict). The book was praised it for its ‘intelligence and delicacy’, its far-ranging scene-setting, narrative momentum, and shifting moods between sadness and humour; Bénédetta Piolanti from Cardiff singled out most illuminatingly Dubois’ dramatic, eco-political critique, through his portrayal of a residential building, of current landlordism and profiteering.  In the general evaluation that followed, the judges agreed, however, that the overall standard of the short list was disappointing, and that it failed to represent exciting voices in contemporary French literature.  Their message to Les Dix: Could do better.

You can access a French translation of Marina Warner’s speech, on the website of En attendant Nadeau here:

Picture copyright : France in the UK