Being a Modern Languages Ambassador 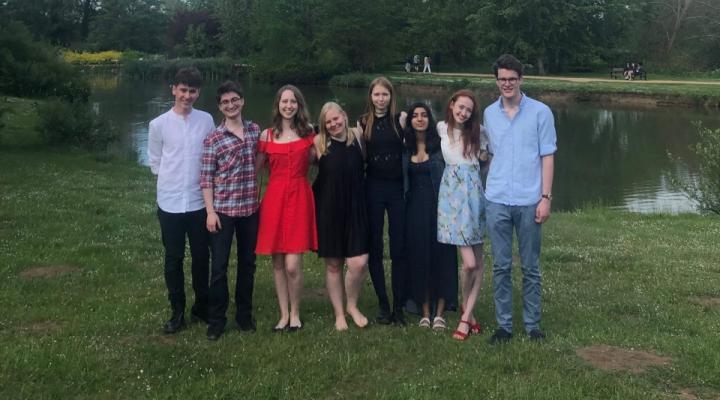 I am a ‘Student Ambassador for the Faculty of Medieval and Modern Languages’, in the second year of my degree reading German. In Michaelmas Term 2018, lured by the prospect of a job with such a satisfyingly grandiose title, I applied to help with the university’s outreach program, and was immediately daunted upon actually being accepted. On paper I’m a pretty good poster girl for access at Oxford, being a first generation student from a working class family. But, I thought over the winter vacation, public speaking frankly scares me, and I’m not planning to become a teacher. Have I just made an embarrassing mistake?

In February, however, I bit the bullet and accepted the first offer of work to arrive, which came from the Oxford German Network. They wanted a few of us to attend a Kneipenquiz (pub quiz) at a private school just outside Oxford for a couple of hours. As well as the sixth formers from the host school, GCSE pupils from state schools in the surrounding areas would be attending. We were expected to mingle and ‘lead group activities’. This turned out to mean an evening of chatting to the students, eating chips, and taking advantage of the free bar while answering some quiz questions about German culture and vocabulary. It pays £10.33 per hour. So in May, when the University held a Modern Languages Open Day, I was happy to volunteer my services. This involved answering questions from prospective students and their parents about my degree and showing them to and around Worcester College, a place where I am always willing to go because its grounds contain a lake, with swans.

Later in Trinity Term, there was a German Open Day, and in a moment of impulsive confidence I signed up to go on stage and assist a professor with her presentation about the course. On the day I was terrified. But it’s difficult to make too much of a hash of describing the details of your daily life, and that is essentially what answering questions about your degree is doing. The attendees were interested and respectful, and the professor I helped was kind enough to tell me afterwards that I’d been just the right mix of reassuring and enthusiastic, although I’d always thought my public speaking was never going to be just the right mix of anything. And to close the event we took the students and their families to St. Edmund Hall, where I got to demonstrate the use of a medieval printing press!

Student Ambassadors are expected to help with at least two outreach events and one piece of online media per academic year. Within these undemanding parameters, you can take on as much or as little work as you feel like, and tailor the role to what you’re good at. Anyway, to fulfil the latter commitment I contributed a piece to Adventures on the Bookshelf, the Medieval and Modern Languages Faculty’s blog aimed at sixth form students and teachers. I was studying a German Philosophy module that term, so I decided to write my article about Marxist thought. As well as hopefully demystifying aspects of what an Oxford degree involves for prospective applicants, writing it was useful to me personally, as having to summarize the key ideas of Karl Marx’s Das kommunistische Manifest in 600 words really helped to clarify them in my own mind. I was basically being paid to revise for my first-year exams!

I’ve really enjoyed this job over the past year, and it’s a truism, I know, but stepping out of my comfort zone was no bad thing.