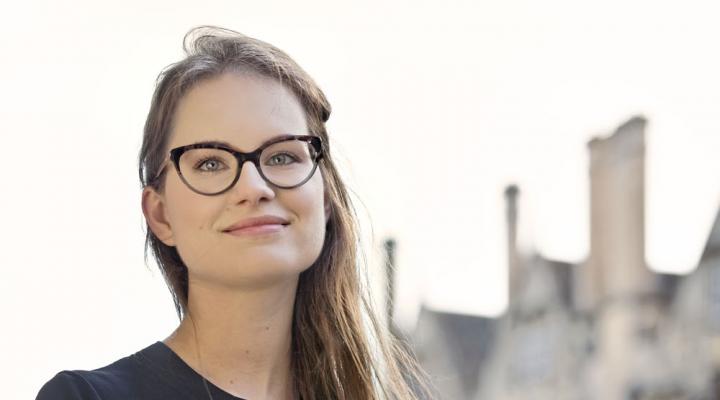 I grew up in a monolingual Polish family with no connections abroad, but learning about other languages and cultures was my favourite part of the school curriculum. The idea of moving to England to study German at university was nothing short of electrifying to me. Despite clearly not conforming to ‘the Oxford type’ with my Eastern European accent and little social capital, somehow I sensed that Oxford would be right for me – ever since the day nearly ten years ago when I perused the university website on a whim and discovered the universe of weekly essays and tutorials, ancient libraries, dreaming spires, and the occasional deer park. Over time, as I better understood many other reasons why young people might feel out of place at Oxford, I decided to get involved with some of the numerous access schemes around the university. Chief among these is UNIQ – a free, week-long summer school aimed at state-school British students whose academic achievements are high, but whose family and educational background makes it harder to apply and get into a top university like Oxford.

I first worked at UNIQ in 2016 as a student ambassador, also known as an academic mentor. I stayed with a small group of participants for the duration of the summer school, accompanied them to their morning classes, helped them with academic assignments in the afternoons, organized social activities in the evenings, and answered all sorts of questions about life at Oxford all day long. I watched my diverse group of six young women of different ethnicities and from all over the country gradually find their voices in the academic sessions, get excited about German literature that they had never read before, raid the Oxfam on St Giles in search of ‘serious’ books, and slowly realise that Oxford could be the place for them. It felt so moving, so rewarding to be a part of their first real experience of university life: I suspect I might have enjoyed the week even more than the students themselves! (The lovely thank-you card which they gave me at the end, as well as the fact that several of them are now undergraduates here, thankfully suggest that they got something out of it too.) It is an issue that all of us engaged in outreach and access activities have to always confront: how to best support those who need it and not just make ourselves feel and look good?

I had a chance to revisit this thorny question the following year, when – as a freshly-minted DPhil student – I was asked to teach daily German languages classes at UNIQ, which complemented literature seminars and tutorials. I decided that the most helpful way to approach this would be to give students an idea of how we teach the German language at Oxford. My programme, which I got to refine in 2018 when I taught it again, included a grammar class (on the main types of complex sentences in German), a conversation class imitating the ‘Lektorenunterricht’ (on German politics), a reading class (where we tackled some of the literary passages set by other tutors), a translation class (structured around the first sentence of Kafka’s ‘Die Verwandlung’), and a linguistics class (on two sound shifts that explain systematic differences between consonants in Romance, English, and German vocabularies, such as ‘p’ and ‘f’ in ‘pes’ and ‘foot’, and ‘t’ and ‘ss’ in ‘foot’ and ‘Fuss’). While students did very well in all the classes, the translation class and the politics class were by far their favourite.

In the translation class, we meticulously compared nine different published translations of the first sentence of Kafka’s ‘Die Verwandlung’ – one of the most captivating openings in the history of European literature: ‘als Gregor Samsa eines Morgens aus unruhigen Träumen erwachte, fand er sich in seinem Bett zu einem ungeheueren Ungeziefer verwandelt’. (You can see the nine translations in this article in The Guardian, which gave me the idea for this exercise: https://www.theguardian.com/books/booksblog/2015/may/13/kafka-metamorphosis-translations.) Looking at ten versions of the same sentence across two languages allowed students to recognize many problems that translators regularly face: differing connotations of superficially equivalent words in English and German, differences in syntax which cause a sentence that flows very naturally in German to sound clunky in English no matter how much one tinkers with it, and the fact that certain seemingly innocuous linguistic choices may have important consequences for our interpretation of the entire text. In this case, the emphatic double negation in the morphology of ‘ungeheuer’ and ‘Ungeziefer’ means that the protagonist is defined by what he is not, making it harder to imagine him. My goal with this session, which I have ran for hundreds of students of various age groups and levels of German all around the country at other outreach and access events too, is to get students to think very closely about both English and German and see how the study of language is also always a study of culture, and that attending to linguistic and cultural differences is one of our most powerful tools to better understand our own language and culture – the way we ourselves speak and think.

In the class on politics, which I taught bilingually – saying everything first in German and then in English, to make sure everybody could follow no matter how much exposure to spoken German they’d had before – we focussed on the 2017 ‘Bundestagswahl’. Based on a series of intuitively accessible graphs and diagrams, as well as comparisons with British politics (is Martin Schulz a bit like Jeremy Corbyn? Angela Merkel a bit like Theresa May? The AfD a bit like UKIP?), students were able to get a sense of what was at stake in that particular election. Our main case study was the spectacular rise and fall of Martin Schulz in the course of 2017, well illustrated on this graph: https://de.wikipedia.org/wiki/Datei:Verlauf_der_Mittelwerte.jpg. There was an opportunity for a listening comprehension exercise too, with students filling in gaps in the lyrics to ‘The Schulz Is on Fire’, a song recorded by his young supporters. Students ended up humming the catchy tune for the rest of the week. More exercises followed, including a comparison of Schulz’s and Merkel’s campaign commercials and a quiz on the colloquial names used in Germany to talk about different coalition options, such as ‘Ampelkoalition’ or ‘Senegal-Koalition’ for SPD, FDP and the Greens. Several students commented afterwards that they hadn’t know much at all about German politics beforehand, but having looked at its manifestations in everyday language and culture sparked their interest. Hopefully this means a few more linguists in the making!

This year I taught at UNIQ again – it has become a welcome fixture in my summer – but in a new format, which allowed the University to expand the entire programme. Rather than inviting twelve A-level students of German for a full week of classes, we were able to host three times as many students, including a group of beginners, for a shorter period of time. I wanted the session I taught this year to be accessible and interesting to both A-level students and beginners, so I decided to focus on German film. The topic was ‘Berlin on Screen’. We compared clips from three very different films set in the German capital: Walter Ruttmann’s landmark experimental documentary Berlin – Die Sinfonie der Großstadt (1927), Tom Tykwer’s iconic blockbuster Lola rennt (1998), and Tykwer’s most recent project, Babylon Berlin – a spectacular, critically-acclaimed TV series, reported to be the most expensive non-English-language series ever made (you can watch the trailer here: https://www.youtube.com/watch?v=88BQr3hSrt8). Students were quick to pick up on cinematic techniques used in these films to reflect – as well as help create – the image of Berlin as a vibrant metropolis where history lurks behind every corner; a city in motion, something which the medium of film – or ‘moving picture’ – is able to capture particularly well. Once again, I wanted to showcase Modern Languages as a subject that trains students to be astute observers – as well as critics and co-creators – of the world around us, able to move beyond national and linguistic boundaries to follow unexpected connections. But this outward movement of curious young minds will only be possible if we simultaneously enable the upward mobility of state-school students, who have drastically fewer opportunities to study languages. In August 2019, editor Paul McNamee advocated on the pages of The Big Issue ‘mak[ing] language learning a new jewel in the education system. Put[ting] the funds in, encourage[ing] learning. Add[ing] that to the cultural capital that cuts through the class system’ (https://www.bigissue.com/opinion/paul-mcnamee-languages-can-cut-through-the-class-gap/). But despite the efforts of many passionate teachers and the academic potential of many brilliant students, this is still a utopian vision. Universities alone can’t tackle the many obstacles that stand in its way: funding cuts in state schools, government policies that play down the value of language learning, and problems with the design and grading of GCSE and A-level exams. What universities can and increasingly often decide to do, however, is to reach out to individual students who have the potential to study languages but lack the resources, encouragement, and know-how to apply for a language degree. This is exactly what programmes such as UNIQ aim to provide.