The United Kingdom’s Choix Goncourt – More than a book club

Hilary Term 2020
James Hughes
James Hughes, a 1st year undergraduate in French at Lincoln, reports on how Oxford students have been at the forefront of promoting contemporary French literature in the United Kingdom. 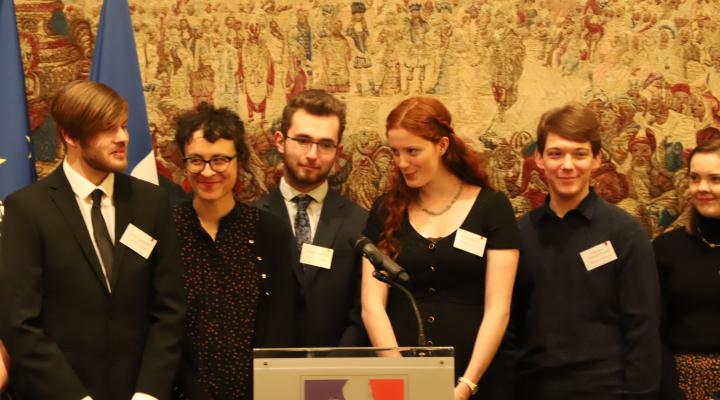 James and Julia, representing Oxford, with other student judges. Credit: France in the UK

Since 1903, the Prix Goncourt in France has become the jewel in many an esteemed writer’s literary crown: Simone de Beauvoir, Patrick Chamoiseau and André Malraux number among the laureates. 2019 celebrated two important Goncourt anniversaries, the first being the centenary of Proust’s Goncourt for A l’ombre des jeunes filles en fleurs. The second anniversary was that of the inaugural “Choix Goncourt du Royaume-Uni,” in which university students from across the United Kingdom became literary judges and determined the United Kingdom’s first-ever Goncourt recipient. At the national deliberations, held in London, two University of Oxford delegates, Julia Moore (Christ Church) and I (James Hughes, Lincoln), presented the Oxford choice, Tous les hommes n’habitent pas le monde de la même façon by Jean-Paul Dubois—it was awarded the Choix Goncourt of the United Kingdom.

The Goncourt brothers, founders of the Prix Goncourt, proclaimed that a book is never a masterpiece, it becomes one. And so the Oxford judging team, comprising students and researchers, embarked upon the reading of the four novels shortlisted for the French Goncourt: Soif (Amélie Nothomb), Extérieur Monde (Olivier Rolin), La Part du fils (Jean-Luc Coatelem), and Tous les hommes n’habitent pas le monde de la même façon (Jean-Paul Dubois). The opportunity to discuss truly contemporary literature, and as such literature momentarily safe from the march of academia, was intensely refreshing and led to much reflection on what a literary “masterpiece” (or at least a Goncourt winner) would look like.

The Oxford literary panel assembled at All Souls College in Michaelmas term for the initial deliberations and to vote for the book that we would represent as delegates on the national stage. What was remarkable was the flourishing of insight and interpretation that arose during the discussions, in which every single contribution was seriously considered and used to inform everyone’s sense of not just the books’ value but also what determines their value. Some might say that this was despite the usual academic critical framework that girdles much of our thought as literary critics. I say it was precisely because of it that such personal and insightful opinions came to the fore, encouraging us all to question how some books seem to transcend the variety of values and expectations held by readers from different times, places and backgrounds. Despite our uncertainties as to what a modern-day Goncourt winner should look like in theory, there was nonetheless almost complete unanimity as we whittled down our selection to a choice between Soif and Tous les hommes n’habitent pas le monde de la même façon. The two books dealing with entirely different subject-matters and written in entirely different styles, our choice, determined by a blind vote, was nonetheless also unanimous for Dubois’ novel, a subtle and yet deeply moving exploration by a prisoner of his past and those who inhabit it.

On Friday 13 December, delegates from the seven partner universities (Oxford, Cambridge, Warwick, Cardiff, Aberdeen, St Andrews and Queen’s Belfast) gathered at the Institut Français in South Kensington for the final deliberations, which were presided over by Professor Dame Marina Warner FBA, President of the Royal Society of Literature. Each pair of delegates delivered a speech in French explaining the reasons for having chosen their book over the others; as we went around the room it quickly became apparent that Tous les hommes was the overwhelming favourite, even more so than it had been in France when it had won the 2019 Goncourt. As such, discussion revolved not so much around persuading others as reflecting on our shared experience of the reading process and also why the other books had almost unanimously been sidelined. At the heart of these observations was the sentiment that literature should be sensitive, but not self-advertisingly so, of its own literary and social context. With Tous les hommes crowned the inaugural Choix Goncourt winner by six votes to one, we relocated to the French Residence for the proclamation of the result in the presence of the French Ambassador, Her Excellency Madame Catherine Colonna. Her words of continued Franco-British cultural exchange were deeply encouraging (after all, the United Kingdom election results had been announced that morning), and by the end of the evening there was undoubtedly a mood of optimism and enthusiasm for next year’s Choix Goncourt.

Against what one could call a precarious national and international backdrop of faltering cross-cultural communication and understanding, literature, with its variously mimetic and transformative powers, becomes increasingly important on multiple levels. All too often we pore over texts, hunting out everything that they might be able to do for us. Our Goncourt experience taught us to also look for what we can do for each other through literature and through the shared process of reading and (self)-discovery that it entails. One such revelation that came from our discussions concerned the power of language to create narrative fictions with such veracity that we can analyse them as if they held significance for the world we inhabit. Perhaps, in what is increasingly being termed a post-truth political era, we could all do well to remember the immense power of language in (de)constructing reality.

Read an article in French in Le Figaro about the UK Goncourt: https://www.lefigaro.fr/livres/jean-paul-dubois-laureat-du-premier-choix-goncourt-du-royaume-uni-20191215