Why I applied to Oxford

Hilary 2020
Eve Bennett
Eve Bennett is in her second year at LMH reading German and Spanish but might not even have applied had it not been for UNIQ. 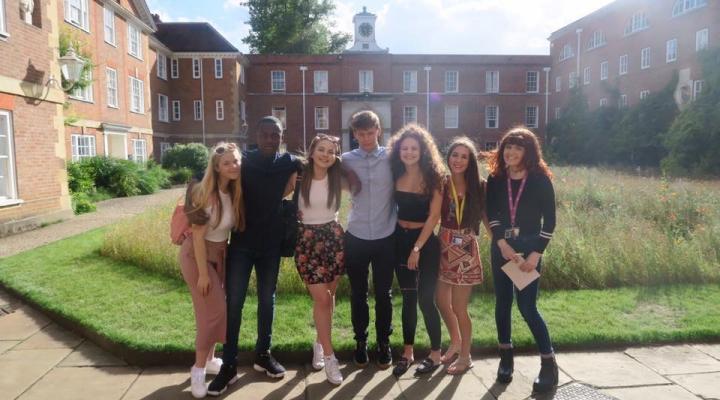 I can still remember the day I stumbled across the UNIQ website. Caught up in the dizzying stress of impending university applications, I, like thousands of 17 year olds up and down the country, was frantically searching for anything I could do to improve my personal statement before I had to send it off in the coming October. I must admit that at the time I had every intention of applying to Cambridge, having attended open days and subject workshops at various colleges there; in fact, I had never even paid a visit to the ‘dreaming spires’ of Oxford. Despite having my heart set on the rival university, I decided last minute to apply to study German for a week on UNIQ, hoping that, if anything, it would at least help me decide which subject I ultimately wanted to apply for. I was pretty sure I wasn’t going to get a spot, so sure in fact that I’d even booked a trip to Berlin on the same dates… so imagine my surprise when I received an email inviting me to Oxford for the first week of my summer holidays! When I hopped on the train, I could never have imagined that the week ahead would not only be one of the best of my life but would also completely transform the life path I was going to take.

I am sat writing this as a second-year student of German and Spanish at LMH, the very college I was sent to when I arrived at the station on the first day. Having only heard of the big names, I felt rather dejected as my friend was ushered off to the famous Brasenose and I was told that I’d be staying at a college I’d never even heard of (I didn’t even know what the letters stood for—it’s Lady Margaret Hall for the record!) And yet, within hours of arriving, I knew instantly that I’d found the place for me, a place that I’m now lucky enough to call my home for four years.

When we arrived at LMH (after a LONG walk from the train station, a walk I still hate doing to this day), I was shown to my room for the week. The huge window boasted a view of the college’s main quad and its stunning wildflower meadow, a view I was to get to enjoy for the entirety of my first year—ironically, I ended up living in a room just two doors down! This was just the beginning of a week during which, little by little, I found myself falling head over heels for Oxford.

Not much time passed before we were thrown into icebreakers and team building activities with the other students on the summer school, some of whom are still my close friends to this day. As the hours slipped away, I realised how nice it was to be surrounded by like-minded people from similar backgrounds. Coming from a state school, I had fears that I would look like the stupid one in the room and that I would have little to nothing in common with anyone—I couldn’t have been more wrong. We bonded super quickly and met our amazing UNIQ ambassador who answered our seemingly endless stream of questions about the week ahead. As I went to bed on that first night I was filled with both excitement and nerves—would the classes be too hard for me to even participate? Would the professors be as scary and intimidating as I imagined?

Looking back now as a student here at Oxford, I can honestly say that the summer school is about as close to mirroring an actual week at the University that you can get. From translation seminars to tutorials, I immersed myself in every class and began to feel like I could one day be a real Oxford student. I definitely felt stretched and challenged by the professors, but they also gave enough guidance to encourage me to think critically and expand my intellectual horizons. It also gave me a feel for the areas of my subject that fascinated me most—the translation classes were by far my favourite and the things I learned actually formed a large part of my personal statement. I was even lucky enough to have the very same professor teaching my translation classes when I came back as an actual undergraduate!

As well as being introduced to the academic side of the university, UNIQ’s social programme also made the evenings even more enjoyable. Rather than being cooped up alone in my room, I tried out rowing, played endless games of werewolves, and got a sample of an authentic college BOP on the final night. These definitely rank amongst my fondest memories of the week and led to friendships that I still cherish over 2 years on. We were also given vouchers to try the food from stores across Oxford—the lemon and poppy seed muffin from Greens and the pasta from Taylors were the biggest hits amongst the group, but I must say that LMH’s food was the deciding factor in leading me to apply!

The most useful part of the week, however, had to be the myriad of workshops and talks we were given about how to make a competitive application to Oxford—from the personal statement to the interview, everything was covered in such great detail that I came away feeling far more prepared and far less daunted by the prospect of sending off my UCAS in a few months’ time. Most state schools lack the resources to help their students in applying to Oxbridge, and it can often feel like we miss out on all the insider information and secret tips given to students at private schools with extensive support for their high-achieving students. UNIQ helped break down that barrier by showing that Oxford truly is a place for everyone, giving me both the advice and the confidence I needed to make that leap of faith and apply. I genuinely think that the summer school has made the world of difference for thousands of state school students like myself as a result.

As the week drew to a close, I felt surer than ever that Oxford could be a place for me, and I was more excited than ever about applying. I honestly think that if it weren’t for UNIQ, I wouldn’t be sat writing this in my room in Oxford right now. Not only did I come away with invaluable advice, a deeper understanding of my subject and a better idea of what university life was like, but I also made lifelong friends and gained a newfound sense of confidence that aided me enormously during the admissions process. I now do a lot of work in access and outreach myself and I will continue to sing the praises of UNIQ for a long time to come. Initiatives like these are beyond key in helping demystify universities like Oxford and encouraging students from disadvantaged backgrounds that they are welcome and deserve to be here, and I can only hope to hear many more stories like my own as the summer school grows and expands!