Trinity Term 2020
Dr Kristina Gedgaudaite
On 31 January – 1 February 2020, a two-day colloquium Modern Greek Studies in the 21st Century: Perspectives and Practices in Cultural Analysis, launched a TORCH International Partnership between the universities of Oxford and Amsterdam. 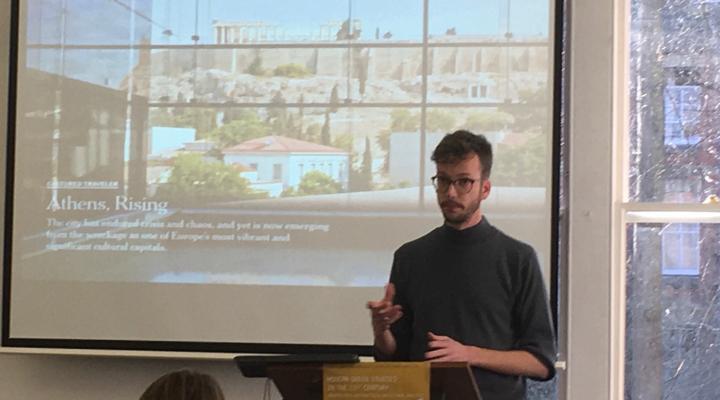 Herbert Ploegman lecturing as part of the event.

Building on the existing synergy between the two vibrant research communities in these two universities, the partnership initiates an innovative Cultural Analysis Network on Modern Greece. Over the two days, no less than 35 speakers, including established scholars, early career researchers and graduate students came to Oxford to celebrate the launch event from 10 different universities.

The event opened with the guest lecture ‘Οn Ghost Ships, Conjurations, and Broken Promises: C.P. Cavafy’s Poetics of the Spectral’, delivered by Professor Maria Boletsi on the eve of the colloquium. Professor Boletsi provided us with fascinating new insights into the ways Cavafy’s writing experimented with activating the past in the present and yielding a porous ‘now’ that breaks with the linear temporality and speaks to different future presents. Some of the future presents that C. P. Cavafy’s poems endured throughout the 20th and 21st centuries have been showcased by speakers in the panel ‘Cavafy in Context’ on the second day of the conference. But the conceptual framework proposed by Professor Boletsi during her talk also responded to and prepared grounds for further exploration of one of the central questions that the network aims to address: ‘How can we make Modern Greek Studies more multicultural, pluridisciplinary, comparative, inclusive and less (pen)insular?’.

The conference opening panel ‘Elsewheres. Towards less (Pen)insular Modern Greek Studies’ responded to this very question in ways that each offered not only insightful case studies but also proposed important shifts to our own theoretical paradigms: be it by turning back to the poetics of Cavafy (Georgios Tsagdis) or through tracing contacts in the ‘literary Eurozone(s)’ of the contemporary world (Alexis Radisoglou), by turning to the diasporic vision of Theodor Kallifatides (Francesca Zaccone) or mapping the Greek Aljamiado – Greek written in Arabic script – in the 17th century Ioannina (Will Stroebel), these presentations offered ways to open the Greek cultural canon for important inter-cultural dialogues and called for the (re-)framing of its boundaries as well as our own perspectives.

The question of a paradigmatic shift came up again in the roundtable discussion ‘Rethinking Crisis, Greek Society and Greek Studies’ in the afternoon of the first day, dedicated to the question that has put Greece at the centre of many scholarly and public debates in recent years. ‘Did the recent socio-economic crisis bring paradigmatic shift into Greek politics and society or did it merely spur the country into a new normal of low expectations?’, provocatively asked Alexander Kazamias through his intervention. There is no uniform way to answer this question, and the multiplicity of approaches to the Greek crisis and its legacies on both days of the colloquium – offered through cultural analysis of literature, film, photography, street art, contemporary museum spaces as well as their institutional politics – only highlighted the complexity of issues one needs to take into account if we are to adequately assess the impact of the crisis on Greece’s present day cultural landscape.

Migration, national identity and citizenship was another cornerstone on which a number of discussions focused, reassessing past archives of displacement as well as present-day challenges. ‘It is important to remind ourselves that in Greek the concept “refugee” is a term of honour’, stressed Effie Voutira during the book launch of Olga Demetriou’s Refugeehood and the Post-Conflict Subject, inviting us to reflect on how Greece’s migration history can facilitate addressing the current pressing questions. Another insightful alternative on how one might approach migration came from Eveline Mineur’s analysis of Stratos Kalafatis’s photographic project Archipelago on the second day of the conference. ‘What if the Aegean Sea that has for centuries constituted a central element in the representations of the Greek nation instead connoted its connections to other archipelagos across the globe?’, she asked daringly through her presentation, proposing an alternative ‘archipelagic’ vision of belonging. Such questions resonated ever more strongly with the audience as the colloquium started on the day before and concluded the day after the UK officially left the European Union.

Only some of the discussions and approaches could be highlighted in this short post, but full conference programme and abstracts, as well as more information about the partnership, can be found on our website. A series of blogposts from the conference will also be published online, starting from 1 June 2020, on the Modern Greek Studies Virtual Seminar.