Guadeloupe, Slowness and the pleasures of ‘inconvenience’ 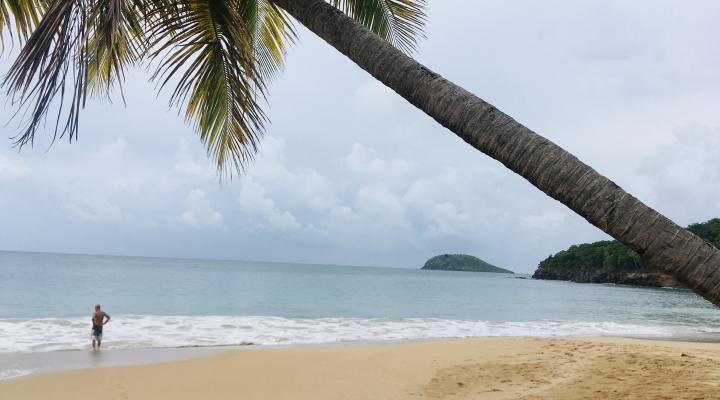 ‘Tout de suite’ comes the response when I ask what time the bus departs for Point à Pitre. If I was in the Hispanosphere, this pressing immediacy would invariably be better translated by mañana. The Guadeloupian response is at once more optimistic and more dishonest, it is taquin, delivered with an all-too-knowing smile. My nominally ‘hour long’ bus journey concluded at around midday, five hours after I boarded. How inconvenient. Perhaps this would be true had I somewhere to be, but when you’re not pressed for time, it’s striking how it ceases to put pressure on you. If you can enjoy the pleasure others take in such uncertainty, then the potential dishonesty of tout de suite pales alongside its concurrently teasing optimism. Much of my experience here could be seen as an exercise in inconvenience, uncertainty and (with the addition of a language barrier), frustration. This is all predicated on my ingrained Britishness to ‘make the most of my time here’ or ‘use my time well’. Imposing such pressure upon Antillean unhurriedness is a bit like constantly walking up an escalator in the wrong direction; initially it seems possible, perhaps even a good idea: a bit of exercise, a challenge to do something unconventionally, against the grain. That is only true until the sweat, self-consciousness and superfluity of doing so becomes increasingly apparent. 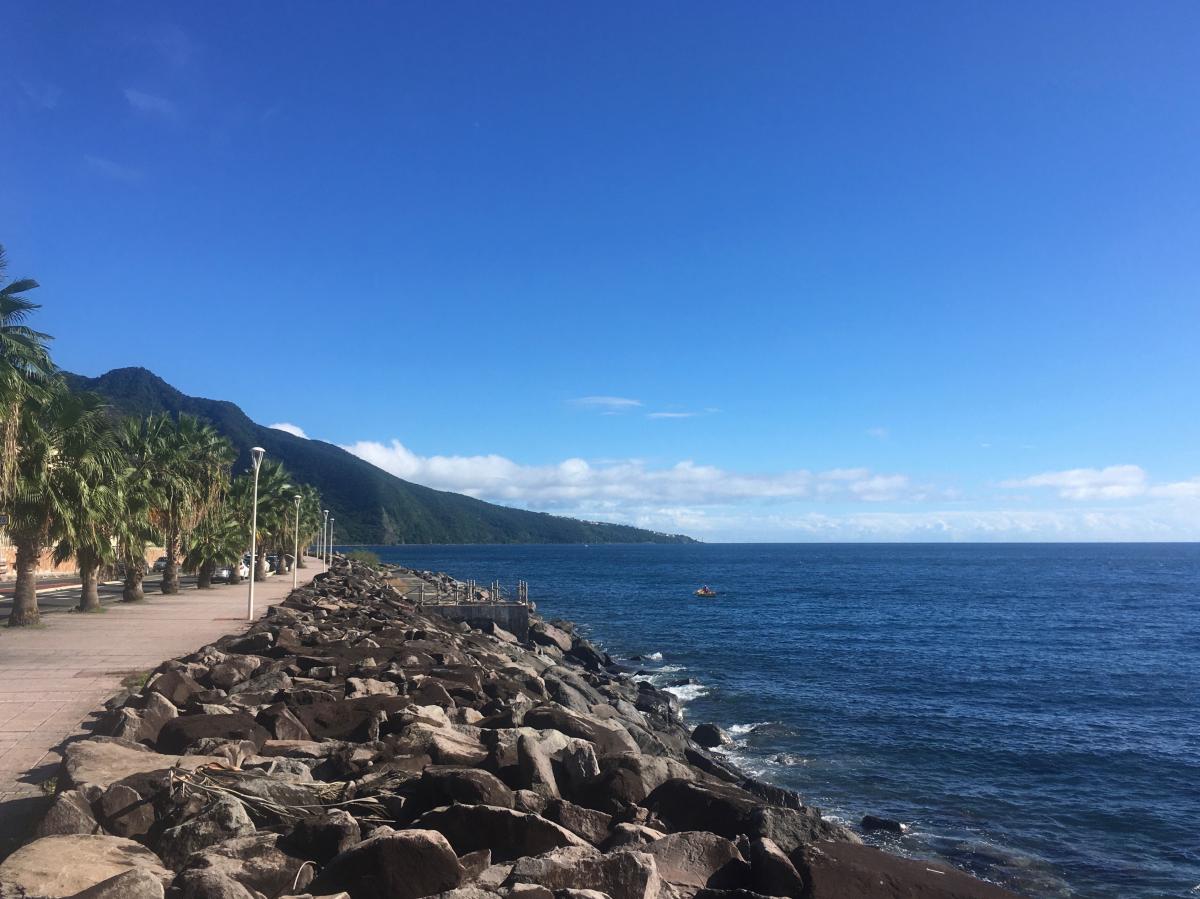 In the opening lines of Milan Kundera’s La lenteur the narrator observes a man in his wing mirror trying desperately to overtake: ‘Le chauffeur attend l’occasion pour me doubler; il guette ce moment comme un rapace guette un moineau.’ A few lines later, he asks ‘Pourquoi le plaisir de la lenteur a-t-il disparu? Ah, où sont-ils, les flâneurs d’antan?’ Guadeloupe strikes me as an obvious answer. However, its sleepier instincts are nowhere to be found on the roads; adhering to the speed limit is less popular than reconfinement, and newly installed radars are burned down faster than the cars that now bypass them fly. This paradox of le flâneur and le chasseur/chauffeur appears to be close to the hearts of many French Antilleans and perhaps best encapsulates the duality of a sleepy island abruptly thrust into a modern, Westernised era, where it adopts and adapts to technological developments from afar. Coming from afar – an isle more accustomed to le chasseur/chauffeur lifestyle – the past few months have been my turn to adapt and adopt. Unable to drive, the only lifestyle available to me has been that of the flâneur, and I have steadily learned that, even faced with what British-me might consider gross inconvenience, there are only ever two appropriate responses: tranquille and pas de souci. Learning to abandon my soucis was an aptly slow process, but has opened my eyes to the veiled pleasures of inconvenience. 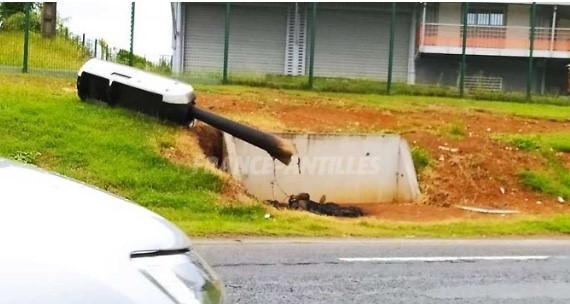 A few weeks after arriving I decided to venture a little farther afield, taking a bus to Grand Anse beach. Caught up in the scenery from the bus window, I scarcely managed to alight at all, and only eventually did so with a blustering, flustered Britishness, neglecting to ask what time the return bus might be. After a few hours in the sun I returned to the bus stop, hoping that, at a push, a bus an hour wasn’t overly optimistic. It was – the bus that had taken me there was in fact one of a daily two, and the later one at that. Tranquille, I’ll just walk the 15km home. I’ll harness my inner flâneur. With the afternoon sun transforming Basse-Terre’s coastal hills into a fast-moving, unhospitable escalator against which you have to fight, I soon realised I was (scarcely) moving against the grain. Why not hitchhike? The ultimately inconvenient form of transport: no timetable, no tangible progress while you wait, reliance on the kindness of others. Seemingly extinct in England, I hardly knew how hitchhiking was done. So I sheepishly stuck out a thumb, donned a mask and tried to look (both Covid and just generally) friendly. The chasseurs/chauffeurs who initially appeared delighted in accelerating towards me, their fuming exhausts telling me to choke on my idealism and archaic approach to travel. Do people even hitchhike here? I had no idea. My thumb wavered in the air as the un-Britishness of asking for a stranger’s help stuck in my throat, mingling with the mockery of the chasseurs/chauffeurs. Suffocated by my own pride, I briefly restarted the uphill battle on foot, resolving to not-so-productively use my time on the road to beat myself up for not getting a driver’s licence when I had the time. The futility of this became apparent tout de suite, and my thumb resumed its sheepish signalling for help. Almost immediately I was picked up by a French lady who told me she used to hitchhike herself, and could take me halfway home. Perhaps unsurprisingly, she drove slowly, making the most of a chance to chat as we wound along the coast. She dropped me off with renewed hope, lots of local recommendations, and an invitation to a barbecue that weekend. Hitchhiking: uncertain, definitely. Inconvenient, almost certainly. I still had 7km to walk home, but had learned how (even the accidental) flâneur’s slowness opens doors that remain invisible to the chasseur/chauffeur. 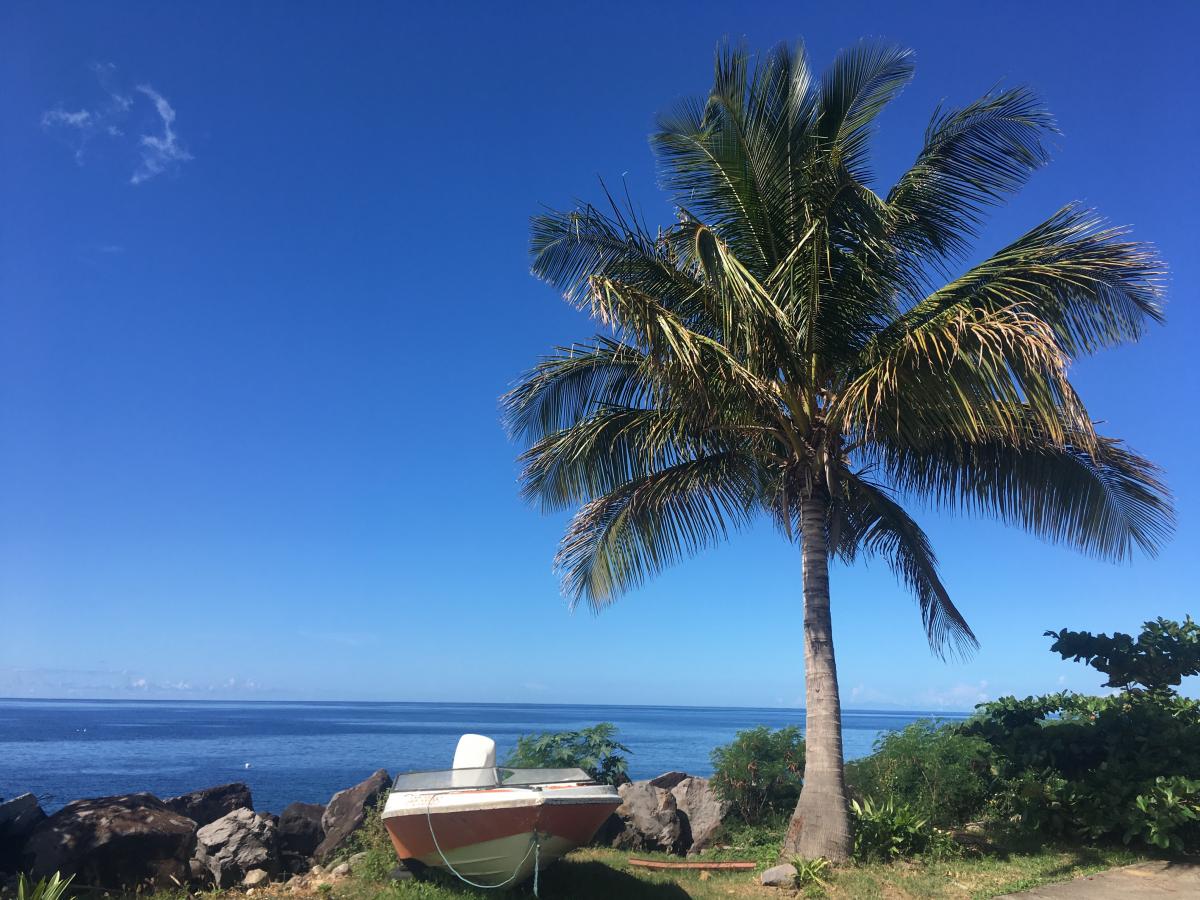 The coast road to Rivière-Sens, Basse-Terre

Buoyed by this encounter, I took a perhaps ill-advised detour home to swim at a little fishing village. However, I wouldn’t have found such a lovely spot without the ‘inconvenience’ of being dropped halfway home. As the sun began to set, walking home under its orange gaze no longer seemed entirely impractical. As more and more cars passed, I decided to give hitchhiking another go before nightfall. My still sheepish thumb was once again mocked by the purring engines of Guadeloupe’s chasseur/chauffeur class as my medievalism tentatively encroached upon their slick tarmac territory. Before too long I gave up, frustrated by my own Britishness, unable to accept the lack of tangible progress in standing by the roadside. As I ambled along, I optimistically jabbed my thumb at a passing truck, which surprisingly rolled to a stop a few meters later. I was greeted by a broad Guadeloupian grin and hopped into the cab next to Woody. He told me all about his family, growing up in Guadeloupe, and took great interest in British nightlife, asking repeatedly if ça bouge in the same way as his local dancefloors. He took a twenty minute detour, dropping me at my front door with a smile that can only be described as taquin, and a nonchalant pas de souci as I thanked him. He made my day, showing me that ‘inconvenience’ is no such thing if one finds pleasure in its diversions. Grand Anse was lovely, but the professed ‘objective’ of my day was infinitely inferior to the journey. A journey that was hideously inconvenient, and perfectly so. A month on, and I am rather aptly still reading La lenteur, intent on adopting the flâneur’s slowness and spontaneity that seems to be Guadeloupe’s true off-road self.