Getting the ball rolling with Moussa Sissoko 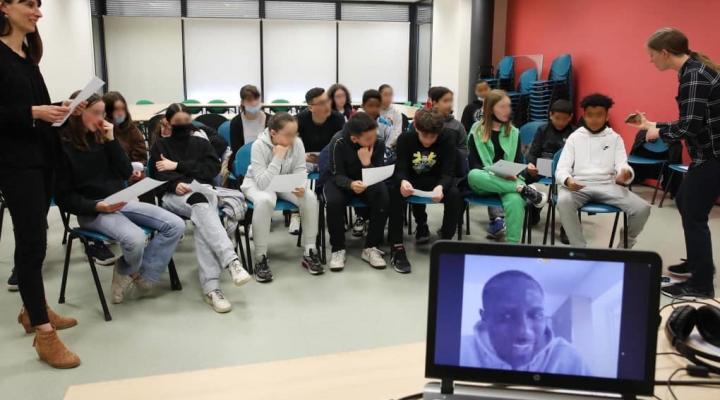 Teaching English in Tours, France was quite the experience. Whilst getting a word of English out of certain students proved harder than squeezing water from a stone, overall, it was an experience I’ll never forget. I worked in two collèges (with students aged between 11 and 15) and had a very different role in each. In one, I was very much an English teacher (albeit one resembling a student), taking half the class and being given free rein to teach whatever I wanted. And in the other, I either worked alongside the teacher or delivered lessons under the teacher’s supervision.

Despite these two different approaches, my role in both schools was to work on the students’ speaking and listening skills and to teach them about British culture. So, throughout my seven months working as an English Language Assistant (ELA), I delivered lessons on subjects such as Christmas/Halloween in the UK, the UK education system, university life, sport and also a very amusing ‘How to be British’ lesson. But by far the most innovative English lesson of the year came on my last working day, with one of the cinquième (Year 8) classes having the opportunity to practice their English with Moussa Sissoko – a footballer for Watford FC and the French National Team.

Of course, I needed a helping hand in facilitating this project. My uncle writes a section in the Watford FC matchday programme and initially suggested the idea. As an avid Watford fan since the age of 6, it goes without saying that I was keen, and luckily for me, so were his contacts at the club. I then mentioned it to one of the teachers I worked alongside, who was also keen on the idea and happy to work on the project with me.

It was then just a matter of working out the logistics of it. It’s safe to say that this proved harder than I first thought. Disaster struck and the teacher went down with flu. We therefore had to put the project on hold, and I did wonder whether the Year 8 class would ever get their chat with Sissoko. As the Easter Holidays approached, we set the 28th of April for the Zoom chat with Sissoko. I introduced the project to the students, with their faces a picture of both shock and excitement (even more so once I’d explained the project in French as well!).

I cannot count how many times students had previously asked me whether an activity I had planned needed to be ‘en anglais’. And so, after initially presenting the Moussa Sissoko project, it came as no surprise that one of the first questions I was asked was whether they would have to ask Sissoko questions in English. I politely pointed out that although Sissoko was French and could converse in their own tongue, the aim was to improve their English! There was even a student who innocently asked if they should use ‘tu’ or ‘vous’ with him (with ‘tu’ being the more informal and ‘vous’ being the more formal ‘you’ pronoun in French). I quickly explained this wouldn’t be necessary, as just one ‘you’ pronoun exists in English.

The rest of the lesson was then spent thinking up things to ask Sissoko, with my help required to formulate coherent questions. I had to chalk off a couple of questions along the lines of ‘How much do you get paid?’, for obvious reasons. From the get-go you could tell how engaged the students were, which was really great to see.

With everything prepared and ready to go, a slight miscalculation reared its head. My uncle’s simple message ‘Make sure you agree the 2.00 start is UK or French time’ threatened to curtail the entire event. With the club contact being unsure as to whether Sissoko would be out of training and ready for a call as early as 1PM UK time, myself and the teacher spent the Thursday morning eagerly awaiting an update as to whether the event could run as planned. Thankfully, we were able to go ahead, with just a slight delay. Relief all round!

Despite a few technical issues which required some improvisation on my part, the Year 8s had their chat with Sissoko, and the event was a real success. It allowed the students to practise their English in a practical setting, with every student asking at least one question in English, and all questions being understood by Sissoko.

The icing on the cake was that I had emailed a regional newspaper (La Nouvelle République) about the possibility of covering the event, and quickly received a response saying that they’d be interested in doing so. I then had a phone call from a journalist who said he would be available to come into the school for the event, alongside a photographer.

There’s nothing more satisfying than seeing a project through and I couldn’t have asked for a better way to end my time working as an ELA in France. Since then, I have been sharing the newspaper article and event here, there and everywhere, even going as far as using the article as a translation exercise from French to English for one of the students I tutor.

My French students may not end up supporting Watford (as I’d hope!), but perhaps their awareness and enthusiasm has been increased, and when in England, they will venture to Vicarage Road (Watford’s stadium), where they can tell locals how they once ‘met’ Moussa Sissoko.

You can find the article here.