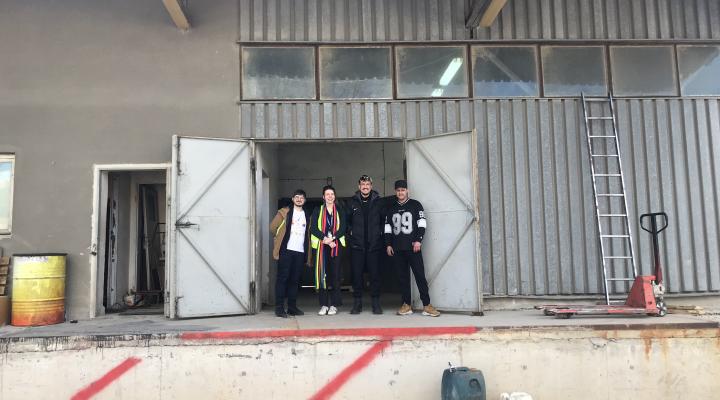 Oxford students help out at the border

On 24th February 2022, the world watched as Russia escalated its already ongoing war in Ukraine. Where the fighting had been confined to the far east of the country for eight years, the whole of Ukraine was now in active danger. Two weeks later we flew out in order to assist at the Polish/Ukrainian border, the epicentre of the ongoing refugee crisis. As Russian language speakers, we knew that our skills would be invaluable on the border, helping people to plan their onward journeys.

The context of Russian language use in Ukraine is vital to understand here. Russian propaganda would have us believe that Russian speakers in Ukraine are oppressed, and that it is fighting to free them. In reality, people in Ukraine have a far more fluid, nuanced understanding of their linguistic identity. Ukrainian may be used at home, and Russian at work – or vice versa. Often, people speak Surzhyk, a dialect which combines the two. We will start a conversation with someone in Russian, only for them to switch naturally to Ukrainian halfway through. Some would rather speak entirely in Ukrainian now, unwilling to share a language with those who are massacring them. For others, Russian is simply their language, the language of their family, the language of some of their greatest writers — from Gogol to Andrei Kurkov. That they share this language with Russia is an unfortunate fact of history. From our perspective, it feels like the ultimate act of defiance against Russia to be using the language the Kremlin claims belongs to them to help Ukrainians flee.

A lot of the time, it feels like our role here is as advocates. The most vulnerable people are the most likely to fall through the cracks left by the inefficiency of the state response and internal station bureaucracy. One example of this can be seen in the sleeping area in the station. Meant for mothers and children, the definitions of what constitutes a young enough child change daily. One day last week, we were told that it could only be used by under-fives. Multiple beds still remained empty when all the under-fives had been allowed in, but the policemen guarding the entrance still refused to budge. Two young girls – aged six and eight – were asleep on top of their suitcases on the floor in the main station hall. In the end, we told their mother to gather up their things, and we each took a sleeping child in our arms and walked them past the police, laying them down on the beds. If you want to move them, we told the police, you can – but it is on you to wake them up. They let them sleep. I wish that this were an unusual situation, but it has happened in various ways more times than I can count.

The most difficult refugees to deal with are those who are returning. It is not our place to dissuade them, but putting someone back on the train to Ukraine when you know that the region they are going to is a hot spot is a uniquely distressing experience. Many return as a result of their poor reception in Europe – weeks spent in refugee centres (a nice word for an indoor refugee camp), often with no Russian or Ukrainian volunteers to help them. All we can do is offer to help them find something better. Sometimes they agree to stay, and we do our best to find them somewhere safe to live in a dignified way. Often, they go. We keep in touch where we can and make it clear to them that if they change their minds and want to come back, we will still be here, and the offer of assistance still stands.

Soon after arriving here, it became clear that the situation on the ground both on the border, and in Ukraine, was far worse than we had thought. A lack of NGO presence meant that grassroots movements were needed, and urgently. We founded the Kharkiv and Przemyśl Project (KHARPP) in order to help those on the eastern borders of both Ukraine and Poland – those who have fled war, and those who have stayed behind. In between shifts working at the train station, we organise shipments of food and medicine to Kharkiv, and having signed a lease on a warehouse in Przemyśl, are now able to massively upscale our project.

The war shows no sign of ending any time soon, and the world continues to watch as civilians are butchered and cities are flattened by Russian troops. We must all do our bit to help Ukraine – and it is an honour to be able to use our language skills in this way.

Other Slavonic at Oxford