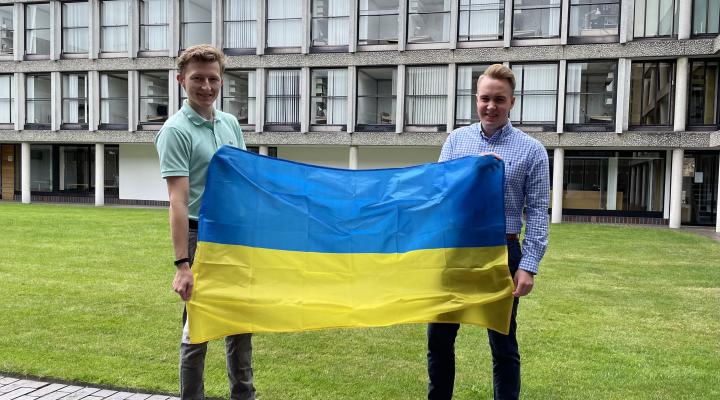 Six months ago, telling people that we were reading for an MSt. in Slavonic Studies never exactly raised any eyebrows. Now, whenever we tell people that as part of our course, we study Russian and Ukrainian, we always seem to get the same ‘Ooh, that seems relevant’ response. Suddenly, Ukraine and Ukrainian have come to be more apparent on the world stage through President Zelenskyi’s speeches as well as social media posts snapped from the conflict zone. Increased awareness of the mere fact that Ukraine has its own language seems to have made people curious to learn more about it. As such, we are often asked many different questions about our experience of learning Ukrainian and we would like to take this article as an opportunity to share some insights into the language and our experiences of learning it, and to shed light on some of the misconceptions people may have about it.

One question we are often asked relates to how close Ukrainian is to Russian and whether the former is just a ‘dialect’ of the latter. Given that we are learning Ukrainian having studied Russian during our undergraduate degrees, we can safely say that the two are most definitely their own languages with interesting grammatical and lexical differences. Some of Ukrainian’s beauty can be found in these, such as the months of the year, which have no similarities with the Latin-based ones that learners of European languages may be accustomed to. For example, November is листопад (lystopad), or “leaf-fall”, and August is серпень (serpen’), which refers to the scythe used to cut down crops (we would gladly name all these beautiful months of the year and how they are related to different plants, activities and colours, but we encourage you to start your own Ukrainian journey by finding them out for yourself!)

Of course, this does not mean that the two languages are completely separate from each other: with Russian and Ukrainian both rooted in Old East Slavonic, it is commonly reported that they share around 60% of the same vocabulary and have very similar grammatical features. This is where the misconception that they are simply dialects lies, as most people see that “hello” is привет (‘priviet’) in Russian and привіт (‘pryvit’) in Ukrainian, and prematurely jump to the conclusion that all words are basically the same with a couple of vowel changes. With that said, even if a Russian speaker may be able to decipher around six out of every ten words in a Ukrainian text, this would still create problems with comprehension, in terms of vocabulary, accent and cultural differences. For context, English actually shares around 60% of its vocabulary with Dutch, yet we still see it as a language quite foreign to us.

On this note, a similar question we are also often asked relates to how easy it is to confuse the two languages, especially while speaking them. On the one hand, there are many ‘false friends’ in Ukrainian to grapple with. This complicates things coming from a Russian point-of-view. A great example is the Russian уродливый (‘urodlivy’) ‘ugly’ and the Ukrainian вродливий (‘vrodlyvy’) ‘handsome’ – a potentially inexcusable mistake! On the other hand, it certainly takes some time to get re-accustomed to the Russian pronunciation of letter г (making a ‘g’ sound) after spending several hours reading in Ukrainian (which renders a ‘h’ sound instead). Similarly, it can certainly be tempting to insert Ukrainian words while speaking Russian, as well as to instinctively shout out the Russian “yes”, да (‘da’), over the Ukrainian так (‘tak’), and vice versa.

Interestingly though, there are potentially hundreds of thousands of Ukrainian speakers who would consider ‘da’ an acceptable way of saying ‘yes’ in their language. One of the most striking features of Ukrainian for us is its wide regional variation, driven by its contact with Russian in the east and other languages like Polish in the west. While other European languages may have different words for the same thing in different parts of the country (bap vs bun vs roll etc), or different accents in different areas (how do you say bath and scone?), it is surprising to read vastly different degrees of grammar and syntax in texts by authors from one side of Ukraine to the other.

A final question we are often asked is: “should I start learning Ukrainian?” To this we eagerly urge anyone with any desire to at least give it a go! Having gained a reading knowledge of Ukrainian, we now have access to a whole new stream of information, from Ukrainian news channels and TV shows to the broad and rich Ukrainian literary tradition – the foundation of Ukrainian national heritage and identity. Our programme has given us an overview of this literary canon, from the 1920s national icon Lesia Ukrainka via contemporary news articles to the post-soviet writer Yurii Andrukhovych.

In fact, our ‘present’ for over the Christmas holidays was a relatively long text called “Місце для дракона” (A Place for a Dragon) by Yurii Vynnychuk – our first real experience of Ukrainian literature. We told each other upon receiving it how we could barely understand a word of what was written even after a whole term of studying the language. Now, thankfully, having been immersed in these complex texts and getting used to the vocabulary, we feel more at ease heading into our translation exam at the end of term. We don’t think our Ukrainian journey will end there, however. With the imminent arrival of Ukrainians in the UK, we look forward to using our language skills to welcome them into our respective communities. After this, we hope to make the most of our Ukrainian in our future careers.