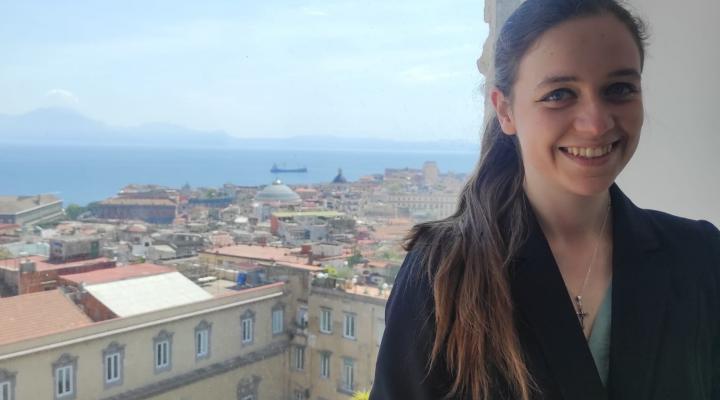 The poet Garcilaso de la Vega (1501-1536) was Spain’s greatest Renaissance poet. He is famous for introducing classical and Italian forms into Spanish poetry and his poems (including sonnets, eclogues, elegies, and an ode) are still widely taught and studied. As well as writing in Spanish, in his time Garcilaso was praised for his skill as a Latin poet. Unfortunately, until recently only three of his Latin odes had survived. We also knew from a letter by the Italian humanist Pietro Bembo that Garcilaso had dedicated an ode to him, but it was lost.

Some months ago, I made an unexpected discovery: in the back of a sixteenth-century printed anthology of Italian poets, someone had copied out a selection of further poems, among which were the three Latin poems by Garcilaso. This was already exciting, since we had not been aware of this copy of the odes. On closer inspection, to my shock and delight, I noticed two more poems by Garcilaso nestled in between them: one was the ode to Bembo, along with a fifth one, dedicated to the German poet laureate Johann Alexander Brassicanus, with whom Garcilaso was not previously known to have a connection. For the moment, I don’t know who copied the poems; the only clue I have is a hand-written anecdote about the Spanish university of Alcalá de Henares, which may be where the book was when the poems were copied out. A critical text of all five poems, along with translation and commentary, will be published later this year in the Bulletin of Spanish Studies.

In his ode to Bembo, Garcilaso modestly claims that he is not a very good poet, but that if he were he would use his talents to praise Bembo. He then goes on to do just that and extol Bembo’s poetry and work as an historian of Venice, saying that Spain is jealous of having someone like Bembo to praise her. He compares this to the story of Alexander the Great, who once went to see Achilles’s tomb and declared that the Greek hero was lucky to have had Homer to write about him. In short, the poem deals in a few ways with the power of poetry: Garcilaso will immortalise Bembo just as Bembo will immortalise Venice, and in doing so he will gain renown for himself.

The second poem refers to tents and armies, which suggests that it relates to Garcilaso’s time in Germany. In 1532, the poet accompanied the Duke of Alba to meet the Holy Roman Emperor Charles V at Regensburg on their way to do battle with the Turks in Vienna. However, the previous year Garcilaso had participated in the wedding of his nephew, which did not have the emperor’s approval, and he was consequently condemned to exile. On arrival at Regensburg, Garcilaso was duly exiled: he was confined on an island on the Danube for several months. Until now, we have only had negative impressions of Garcilaso’s time in Germany, when he says he was ‘imprisoned […] in a foreign land’ (‘preso […] en tierra ajena’) and separated from his wife and family. However, now we have a more positive view, since in his ode to Brassicanus, Garcilaso focuses on one of the friendships he made during that time. He calls Brassicanus ‘Among the first of my companions, bonded | To Lassus by undissolvable law | To the end of my life’ (‘sodalibus | In primis habite, indissociabili | Lasso lege revincte | Vitae tempora ad ultima’, 1–4).

I hope that these poems will help improve our knowledge of Garcilaso and restore his reputation as a consummate Latin poet!