Imogen Choi’s research focuses on early modern Hispanic literature across Europe and the colonial Americas. She has published on poetry and drama and is interested in the ways that imaginative literature can think through notions of the body politic, violent conflict and the resistance to it, faith and identity. She recently co-edited a wide-ranging volume on early modern Spanish American poetry, and will shortly publish her first monograph, The Epic Mirror: Conflict Ethics, Political Community and Epic Poetry in Colonial Peru, 1569-1609. The Epic Mirror studies how Spanish-American writers and veterans at the turn of the seventeenth century used epic poetry to search for ethical solutions to the violent conflicts of their age, in a multipolar colonial world which generated a distinctive vision of just warfare and political community.  Her next project looks at sacred epic written in Spanish, with a particular emphasis on literary communities among the Sephardic Jewish diaspora.

All areas of sixteenth and seventeenth-century Spanish literature (papers VII, X, XII, XIV), as well as translation and the Prelims (first-year) course.

Imogen welcomes applications from MSt and DPhil students working on early modern Hispanic literature and culture, especially those with an interest in poetry, religious culture and/or colonial Latin America.

Doctoral thesis awarded the AHGBI/Spanish Embassy Publication Prize for a Doctoral Thesis 2017-18, in preparation for publication by Tamesis

‘Os lusíadas and Armas antárticas: Eros, Eris and the Art of Imitation in Colonial Epic’, in Rodrigo Cacho and Imogen Choi, eds, The Rise of Spanish American Poetry, 1500-1700: Literary and Cultural Transmission in the New World, pp. 222-238 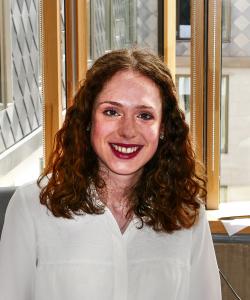