At the moment, I’m completing a second book project Modernist Laboratories: Science and the Poetics of Progress in Fin-de-Siècle Spanish America. It explores intersections between literary and scientific innovation in periodicals published by Spanish Americans between 1870 and 1930, particularly in Mexico, Argentina, Cuba, Europe and the United States. This project has led me to explore early examples of popular science publishing in Spanish America, which reveal the correlations between scientific modernization and nation-building projects. I was the recipient, in 2017-18, of a British Academy Mid-Career Fellowship, which allowed me to advance the research and writing for the project. Between 2015 and 2017 I was co-investigator, with Joanna Page (Cambridge) of the AHRC-funded Science in Text and Culture international network. An edited volume inspired by the network, entitled Geopolitics, Culture, and the Scientific Imaginary in Latin America, will be published by University of Florida Press in 2020.

I have written articles and chapters on Mexican fin-de-siècle Spanish American popular science, Spanish American modernismo, global modernisms, spectrality, and Latinx studies. My previous work, which explores narratives of haunting as responses to different processes of modernization in the Americas and beyond, includes a monograph (Ghost-Watching American Modernity, 2012) and two volumes co-edited with Esther Peeren (The Spectralities Reader from 2013 and Popular Ghosts, 2010).

In the past decade or so, I have supervised doctoral students working on a range on topics related to Latin American and, more widely, hemispheric American literature and culture, and haunting/the ghostly. I welcome students who are interested in studying topics related to literature and science; spectrality; landscape; intellectual history in Latin America and beyond. I’m very interested in supervising comparative projects that explore transnational literary and intellectual exchanges in the nineteenth and twentieth centuries.

“Mexico’s La Ilustración Espírita: Toward a Transatlantic Understanding of a Spiritualist Archive,” in The Ashgate Research Companion to Paranormal Cultures, edited by Sally Munt and Olu Jenzen. Aldershot: Ashgate, 2013. 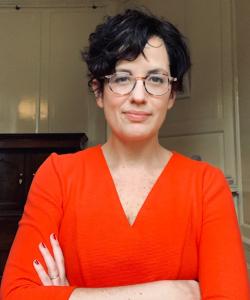