Capital Letters sheds new light on how literature has dealt with society’s most violent legal institution, the death penalty. It investigates this question through the works of three major French authors with markedly distinct political convictions and literary styles: Victor Hugo, Charles Baudelaire, and Albert Camus.

Working at the intersection of poetics, ethics, and law, Ève Morisi uncovers an unexpected transhistorical dialogue on both the modern death penalty and the ends and means of literature after the French Revolution. Through close textual analysis, careful contextualization, and the critique of violence forged by Giorgio Agamben, Michel Foucault, and René Girard, Morisi reveals that, despite their differences, Hugo, Baudelaire, and Camus converge in questioning France’s humanitarian redefinition of capital punishment dating from the late eighteenth century.

Conversely, capital justice leads all three writers to interrogate the functions, tools, and limits of their art. Capital Letters shows that the key modern debate on the political and moral responsibility, or autonomy, of literature crystallizes around the death penalty. Inflecting traditional modes of representation and writing self-reflexively or self-critically, Hugo, Baudelaire, and Camus unsettle the commonly accepted divide between strictly aesthetic and politically committed writing. Form, rather than overtly political argument, at once conveys an ethical critique of justice and reflects on the possibilities, and duties, of literature.

“There aren’t many scholars these days who have the erudition, rhetorical arsenal, and sensibility to give French poetry and poetics their due. Ève Morisi is one of them.” —Debarati Sanyal, author of The Violence of Modernity: Baudelaire, Irony, and the Politics of Form

“In a stunning tour de force that examines the multiple strategies deployed by Victor Hugo, Charles Baudelaire, and Albert Camus to represent and indict lethal justice and violence, Ève Morisi provides a wealth of captivating perspectives that grip the reader’s attention. Her lively analysis illuminates how these three authors use literary transgression to portray state-sanctioned killing—and thus create compelling ethical arguments grounded not in rhetorical discourse but in poetic expression.” —Kathryn M. Grossman, author of The Later Novels of Victor Hugo: Variations on the Politics and Poetics of Transcendence

“It is quite unusual to read a book that so vividly and thoughtfully illuminates the connection between the world of law and of letters. Morisi’s book is distinctive and persuasive in examining the way writers have come to terms with the death penalty and the literary devices they have deployed in so doing. Broad in scope, nuanced in argument, this book is a significant achievement and genuine pleasure to read.”—Austin Sarat, author of When the State Kills: Capital Punishment and the American Condition

“Capital punishment, in this impeccably researched and powerfully argued survey of the contrasting positions held by Victor Hugo, Charles Baudelaire, and Albert Camus, allows Ève Morisi to interweave literature, philosophy and propaganda to illuminate a fundamentally problematic relationship between individuals and governments, between empathy and idealism, and between what can be stated and what defies expression. Written with clarity and concision, this study offers a forceful contribution to an essential and timely debate about individual freedom, the demands of social order, and the limits of state-inflicted punishment.” —Rosemary Lloyd, author of Baudelaire’s World. 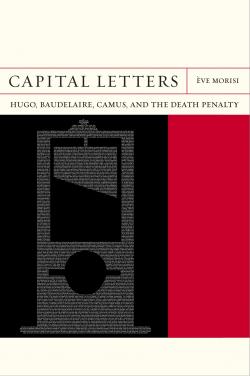