Ève Morisi’s research examines the interface of poetics, politics and ethics in French, Francophone, and comparative literature from the 19th to the 21st century. Several of her projects have focused on the ways in which literary representations of extreme violence and resistance have engaged critically with socio-political forms of oppression, State power, and lethal law at critical historical junctures. Hugo and Baudelaire have been of particular interest for the 19th century; Camus and Algerian Francophone writers for the 20th and 21st centuries.

She is currently working on the figuration of terrorism in modern and contemporary French and Algerian Francophone fiction, and on modern French poetry and politics.

Part of her scholarship has resulted in support by or collaborations with Amnesty International, the Red Cross, the Memorial Site of the Camp des Milles, the Centre Albert Camus-Cité du Livre, and French and British public media (through exhibitions, public lectures, interviews).

Ève Morisi was educated at non-selective state schools in France. She completed her undergraduate and graduate studies at Université Paris VII-Denis Diderot (B.A. in English, M.A. in American literature) before studying at Columbia University (M.A. with thesis in comparative literature), Princeton University and the Sorbonne (joint PhD and doctorat in French and Francophone literature). Before coming to Oxford, she taught at the University of St Andrews and at the University of California.

Having a keen interest in social diversity and widening access, she would be delighted to receive applications from outstanding students from a variety of schools, including non-selective state schools.

For more information on the study of modern languages at Oxford, please see here. For the study of French in particular, see this webpage.  Information about St Hugh’s College can be found here.

For Prelims (1st year of study), È. Morisi teaches the close reading of modern and contemporary short texts and narrative fiction (Papers III and IV). At FHS level (2nd to 4th year of study), she teaches French and Francophone literature of the 19th, 20th, and 21st centuries on Paper VIII, some modern and contemporary “Prescribed Authors” on Paper XI, Papers XII on Francophone literature, 20th-century French poetry and “Histories of violence (1789-present)”, and translation from English to French to 2nd- and 4th-year students.

At the undergraduate level, È. Morisi lectures in both French and English on 19th-, 20th- and 21st-century poetry and prose, including Charles Baudelaire, Albert Camus, Assia Djebar, Marie NDiaye and “Writing Killing” in the post-Revolutionary period.

She has supervised doctoral work on Camus and violence (at the École des Hautes Études en Sciences Sociales) as well as MSt and undergraduate theses on various aspects of 19th-, 20th- and 21st-century French and Francophone literature and culture (Camus and the Résistance, totalitarianism in contemporary dystopian fiction,  ​​​​​masculinity in Boudjedra and Mauvignier, gender and power in Ionesco, Arendt and Camus, olfaction in 19th-c. poetry, etc.). She welcomes prospective postgraduate students who wish to work on topics that relate to her areas of expertise. 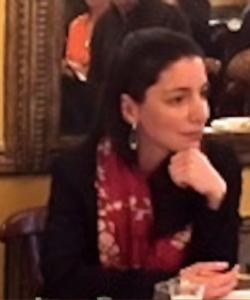