Renaissance readers were fascinated by everything to do with childbirth, from conception, pregnancy and birth to sterility and monsters. With the coming of printing, France witnessed the appearance of a remarkable number of obstetric treatises. This study charts the successive editions of some thirty works, from the first French translation of Euchaire Rosslin’s birthing manual in 1536 to the polemical pamphlet by the royal midwife, Louise Bourgeois, in 1627. Including treatises by Ambroise Paré, Laurent Joubert and Jacques Guillemeau, the volume examines the controversies surrounding the choice to publish in French, at a time when Latin was still the accepted language of formal medical discourse, and analyses debates over such subjects as male and female seed, the length of pregnancy and hermaphrodites. While the texts betray the frequent rivalries between physicians, surgeons and midwives, they also show that the most enlightened authors were concerned above all to reduce the horrific rates of maternal and foetal mortality. It provides a scholarly edition of all the prefaces to these treatises, together with a critical bibliography, a biography and analysis of each author, and some 100 illustrations of woodcuts and title pages. 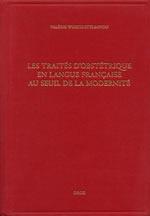