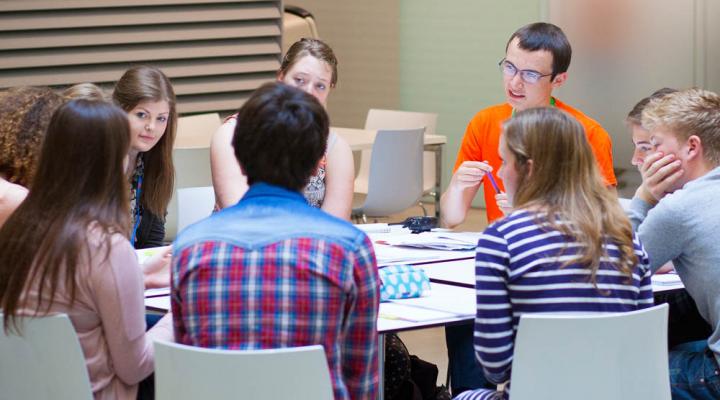 Students of a UNIQ Course in French © UNIQ, University of Oxford

The Medieval and Modern Languages Faculty has a long history of Schools Liaison and Outreach activity, which is enthusiastically supported by faculty members, early-career academics, graduates and undergraduates alike. This year, we have been working to draw together our activities in schools and increase the impact we have, both with a view to encouraging language uptake within schools and widening access to Oxford.

One innovation over the last two years has been the introduction of ‘Oxford Language Days’. These events use a hub model to facilitate engagement between the University and clusters of schools for whom travel to Oxford might be difficult. Typically, one school acts as a host for several schools within the area, bringing together enthusiastic linguists for workshops in French, German, Spanish and an ab initio language.

We want all of our young people to be inspired and make sure nothing holds them back. The event was an amazing opportunity for the students to network and hear about languages at Oxford.

Last year, we trialled the hub model in Worcestershire, Birmingham, and Shropshire, while this year we have expanded into Tees Valley, Devon and Somerset. We find that the hub model works well because it allows us to work closely with teachers, who take the lead on the logistics of the events. This means that we benefit from their local knowledge of schools networks and communities. This model also offers an efficient use of our academics’ time and resources, uniting several schools to create a sense of community in language learning.

The purpose of the events is twofold: first, to allow us to interact in a meaningful academic way with regions that do not historically send large numbers of students to Oxford, encouraging the students to release their intellectual potential and consider Oxford as an option; second, to raise the profile of modern languages in schools as a subject that marries creativity and practical skills, nurtures human connections, and stimulates cognitive development.

We are aware that there are large pools of talent in schools which, for practical reasons such as distance and time, cannot always bring groups to visit Oxford, and we are committed to doing more to attract prospective students from those areas. We also hope that these events offer those pupils in younger year groups a refreshed perspective on creative approaches to language learning, and an understanding of what languages can do for them, as well as what they can do with their languages.

Events such as these allow us to reach out to people who may be unsure of applying to Oxford and give them the support they need to pursue their academic ambitions.

Above all, the Language Days aim to open pupils’ eyes to the opportunities offered by languages beyond the school curriculum. Our workshops with sixth-form students offer them a taster of what it is like to study languages at university, covering themes like multilingual poetry or creative approaches to translation. Meanwhile, with the younger pupils we aim to have fun with languages, encouraging them to be imaginative in their use of language with sessions on Harry Potter in translation or continental equivalents of The Great British Bake Off.

We have also been very fortunate to have been assisted by some brilliant undergraduate student ambassadors. Our ambassadors are enthusiastic and articulate advocates for Modern Languages at Oxford, and at university in general, and we find that their recent experience of the school system makes them relatable and approachable to school audiences.

The picture above shows the Language Day we ran in March 2018 at Conyers School in Yarm. This particular partnership was launched with the support of Ben Houchen, Mayor of the Tees Valley. Speaking at the event, Ben said: ‘We want all of our young people to be inspired and make sure nothing holds them back. The event was an amazing opportunity for the students to network and hear about languages at Oxford. Events such as these allow us to reach out to people who may be unsure of applying to Oxford and give them the support they need to pursue their academic ambitions.’

These are sentiments that we feel hold true for prospective students from across the UK. We look forward to working with even more schools to strengthen the relationship between Oxford and the MFL community at large, emphasising the place of languages in the heart of schools as a nexus for practical skills, personal connections, and creativity.

Thank you for the brilliant sessions you ran. Staff and students from all schools really enjoyed it and students were very much inspired.

— Rachel Houchen, Head of MFL at Conyers School, graduate of the Faculty of Medieval and Modern Languages, Oxford