Alex Lloyd’s main research interests are in twentieth-century literature and film, particularly cultural memory, depictions of children and childhood, and visual culture. Her AHRC-funded doctoral thesis (Wadham College, 2012) examined post-1989 representations of childhood and youth under Nazism. She is currently running a project on the White Rose resistance movement. From 2019-2020 she holds a Knowledge Exchange Fellowship at the Oxford Research Centre in the Humanities, working with the Weiße Rose Stiftung in Munich. Through a series of podcasts, events, and publications the White Rose Project will continue to tell the story of the resistance group and its members in the UK. It will also situate the White Rose within a much larger story about the power of the written word, and how culture can inform political action. For more information, please visit the project website.

Thanks to a generous award from Magdalen College, she attended a course at the MET Film School and has recently been using filmmaking as part of research, teaching, and impact. Her film ‘Leaping from the Edge of the World: Ulrike Draesner in Oxford’ offers a unique perspective on the multi-award-winning German writer Ulrike Draesner. ‘Translating with Ulrike Almut Sandig and Karen Leeder’ gives a brief taster of a translation workshop held at The Queen’s College on 14 May 2016 as part of the fiftieth anniversary of the magazine Modern Poetry in Translation.

As both a singer and a linguist, Alex is also interested in the relationship between language, translation, and music. During the current academic year she ​is the co-convener of a research network exploring the interaction of music and words in the nineteenth- and twentieth-century European song tradition, sponsored by The Oxford Research Centre in the Humanities. The Network was recently part of a podcast about Schubert’s setting of  Goethe’s ‘Gretchen am Spinnrade’. Alex has devised translation workshops with undergraduates, exploring theories of vocal translation and the practical aspects of adapting texts for performance. In 2014 she worked with students on translations of German songs from World War I as part of a college commemoration event, and she is part of the Knowledge Exchange Project Music in Monasteries – Recording the German Reformation.

In June 2019 Alex received a Teaching Excellence Award from Oxford University’s Humanities Division. The award is made ‘in recognition of the high quality of her teaching’ and ‘the important contribution she makes to the teaching of German’.

Recent mini-lectures (‘Teddy Talks’) on ‘How to spot a liar in literature’ and ‘Children’s views of World War II’ are available as University of Oxford podcasts.

For a number of years she was also part of the team which runs the Oxford German Network, an initiative of the German department of the Faculty of Medieval and Modern Languages dedicated to cross-cultural cooperation between schools, cultural organisations, businesses, and policy-makers.

‘Rescreening Erich Kästner after the Wall: Adaptations in the Berlin Republic’, Childhood in German Film after 1989, ed. by Alexandra Lloyd and Ute Wölfel, special issue of Oxford German Studies, 44 (2015), 289-310

Childness and the Writing of the German Past: Tropes of Childhood in Contemporary German Literature, Nora Maguire(Peter Lang, 2014), Germanistik in Ireland, 9 (2014), 160-62 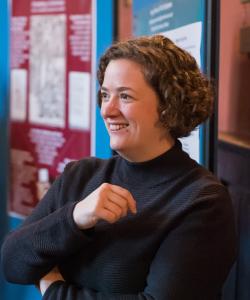