Post-Doctoral Research Fellow in Modern Languages at All Souls College

I work on modern literature, film, and culture across eight European languages and beyond, with a focus on material in German, English, and Polish. As well as being a fellow of All Souls College, which I joined in 2019, and a member of the German Sub-Faculty, I am also on the Oxford Comparative Criticism and Translation Research Centre committee.

I am working on my first book manuscript, based on my DPhil thesis and provisionally titled Mann’s Magic Mountain: World Literature and Closer Reading. It will be the first academic study of Thomas Mann’s landmark German modernist novel Der Zauberberg (The Magic Mountain, 1924) that takes as its starting point the interest in Mann’s book shown by non-academic readers. At the same time, it is a case study in a cluster of issues central to the interrelated fields of transnational German studies, global modernism studies, comparative literature, and reception theory: it discusses topics such as the circulation of an important work of German modernism in the wider world, popular afterlives of a canonical work, access to cultural participation, relationship between so-called ‘high-brow’ and ‘low-brow’ culture, the wider impact of literary modernism, and the limitations of traditional academic reading practices. The main ambition of this study is to present at once a sharply focussed and widely applicable argument about how and why literary scholars can and should study non-academic reading practices.

I am also in the early stages of work on two new book projects. Fictions of Erudition: The European Philosophical Novel in the Twentieth Century will be a comprehensive monograph on the genre of the philosophical novel, focussing on ten novels written over the last 100 years in ten European languages. With Kafka Out of Context, I hope to reach readers outside of the academy by investigating who reads Kafka and why in the twenty-first century, in the run-up to the centenary of his death in 2024.

In addition to ‘World Literature and Literary Value: Is “Global” the New “Lowbrow”?’, which was published in The Cambridge Journal of Postcolonial Literary Inquiry in January 2018 (see here), I have five papers in various stages of preparation for publication: ‘Reluctant Readers: Marxists on Mann’s Magic Mountain’ (English Goethe Society’s Ida Herz Lecture 2020); ‘Between Prussia and the Caribbean: Thinking the World with Humboldt, Ramos Sucre, de la Parra, and Restrepo’; ‘Guy Maddin’s Careful and Bergfilm: A Transnational Approach to German Film History’; ‘Navid Kermani’s Entlang den Gräben (2018): Remapping Eastern Europe’; and ‘Words and Worlds: What Do We Talk About When We Talk About Global German Culture?’.

I grew up in Krakow, Poland, before moving to Oxford, where I studied for a BA in German at Magdalen College and graduated with a congratulatory first-class degree in 2015. During my Year Abroad in Germany, I studied Swedish and Spanish at the Humboldt-Universität, as well as European Studies at the Studienkolleg zu Berlin, funded by the Studienstiftung des deutschen Volkes. In 2016, I completed an MSt in German and Comparative Literature with distinction, also at Magdalen College, funded by an Ertegun Scholarship. I was awarded the American Comparative Literature Association’s Presidential Master’s Prize for the best master’s thesis on a comparative topic; that essay turned into my first publication (see above). In 2019, I completed a DPhil in Modern Languages at Merton College, funded by a Clarendon Scholarship. I was awarded the 2018 American Comparative Literature Association’s Horst Frenz Prize for a paper based on my doctoral research on Thomas Mann and his readers.

I have given undergraduate and graduate tutorials, classes and lectures on a wide range of topics, including German grammar, translation from German to English, modern German literature, and German film (for Prelims Papers I, II, III, IV, XI, FHS Papers VIII, X, XII, XIV, and the MSt in Modern Languages). In 2020/21, I will be teaching first-year seminars on Weimar Cinema, final-year tutorials on Thomas Mann, master’s seminars on the methodology of comparative literature, and master’s tutorials on Polish literature. I also coordinate ‘A German Classic’, the Oxford German Network’s essay competition for sixth formers, and regularly give German and Polish taster sessions for various outreach and access projects based at Oxford and beyond, aimed at school pupils and sometimes at school teachers. I have run several similar classes in Poland as a member of a Polish non-profit academic organisation Collegium Invisibile. 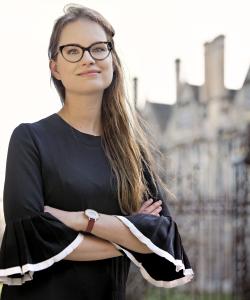