Sarah Ekdawi’s research interests range from classical to contemporary Greek poetry. She has a strong interest in formal aspects of versification, especially metrics, and text linguistics in general. She is the Reviews Editor of ‘Byzantine and Modern Greek Studies’ (the leading UK journal in this field). She is research active and a regular participant in international conferences and is also a qualified technical translator and practising literary translator. In May 2019, she was awarded an honorary doctorate in English Teaching by MCU Thailand, where she is also a visiting professor.

With Elli Philokyprou, ‘Structures of Desire in the Cypriot Sonnets’, Byzantine and Modern Greek Studies, 18 (1994),

With Pat Fann and Elli Philokyprou, ‘Bold Men, Fair Maids and Affronts to their Sex:the Structural Roles of Men and Women in Digenis Akritis’, Byzantine and Modern Greek Studies, 17 (1993),

‘The Matter of Metre: Form Meets Content in the Poetry of Anghelos Sikelianos’, Molyvdokondylopelekitis, 2 (1990), 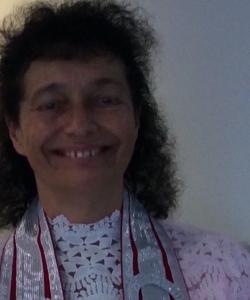