My PhD thesis explores self-translation in Samuel Beckett’s artistic process. It compares the English and French versions of Molloy, Malone Meurt, and L’Innommable and examines how self-translation affects the representation of the character’s mind and consciousness.

On a broader note, my research interests include 20th century French and English literature, poetry, cultural studies, Hip Hop studies, the representation of the mind and consciousness in the arts, literary bilingualism and self-translation.

At Oxford, I have been teaching:

Between 2009 to 2016, I taught different courses in Switzerland including:

Poetry published in the University of Geneva’s English journal Noted :

Theatre and opera reviews published on the University of Lausanne’s Atelier Critique website: 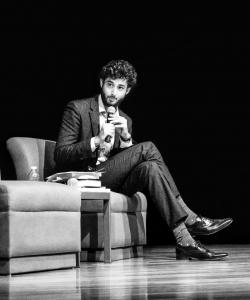 Research: "A comparative reading of Beckett’s French and English trilogy: how self-translation affects the figuration of inner life"