This was the tenth year that the Sub-Faculty of Portuguese has organised Brazil Week and it was the most collaborative so far, involving different Faculties, Centres, Colleges and Institutes across the University, as well as Blackwells Bookshop.

The week kicked off with a screening of the 2019 documentary Democracia em Vertigem (The Edge of Democracy), directed by Petra Costa (2019). This Oscar-nominated documentary about the recent turbulent period in Brazilian politics was introduced by Dr Gui Perdigão, who also chaired the discussion afterwards. Members of the public, undergraduates reading Portuguese, and Brazilians who either study or work in Oxford attended the screening and participated in a lively debate on the current state of Brazilian politics afterwards.

On Tuesday 4 February, two Brazilian visitors to Oxford described their experiences of writing biographies. Consuelo Dieguez is a journalist who writes feature articles for Piauí magazine and a Journalist Fellow at the Reuters Institute in Oxford. She has written numerous perfis [profiles] of Brazilian politicians and businessmen, including Jair Bolsonaro just as he was beginning his campaign for the presidency.

She talked about her interview technique and how she positions herself in her profile articles: as objective observer. She also shared anecdotes about the idiosyncrasies of some of her interviewees, which had occasionally given her the ‘hook’ to an article. 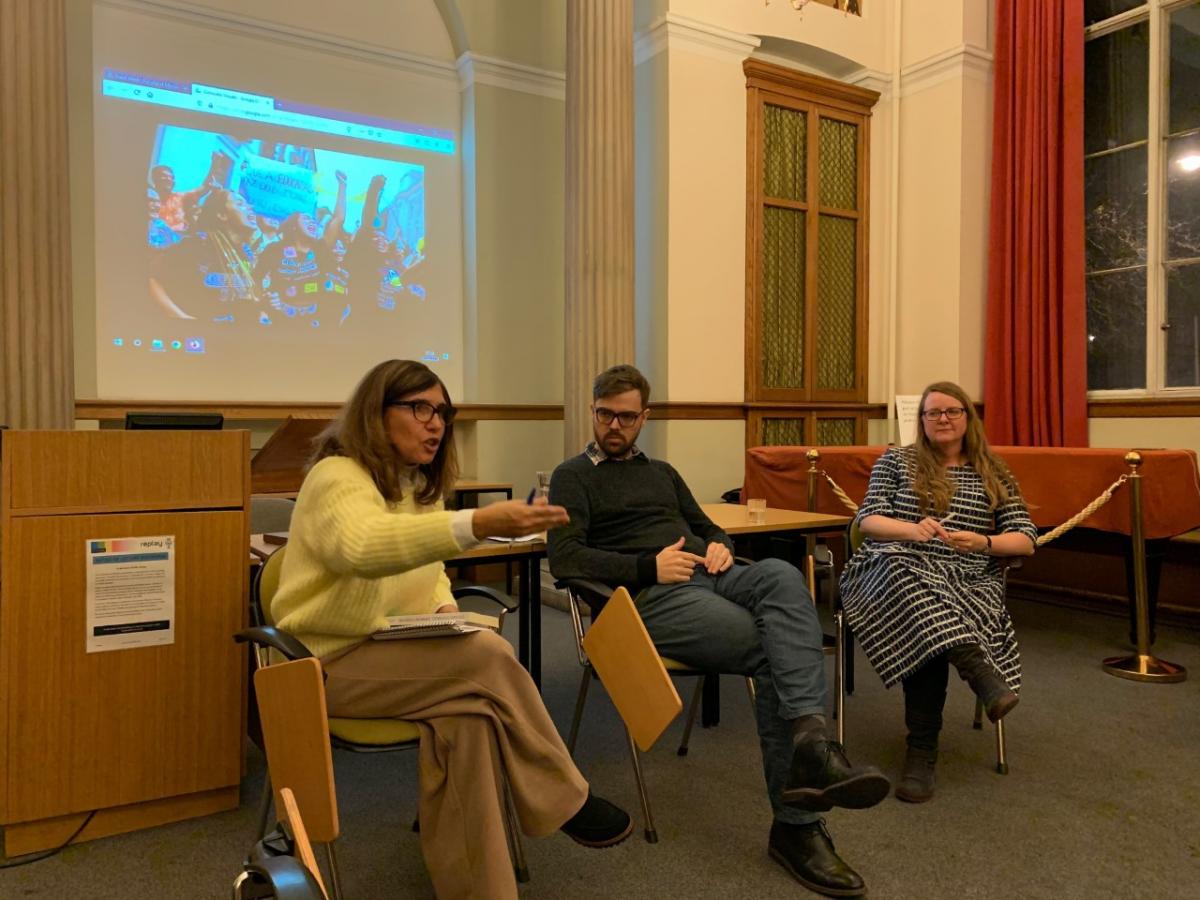 The second guest speaker was Miguel Conde, a journalist, former director of Rocco publishing house, editor at Words Without Borders online magazine and a former curator of FLIP, Brazil’s biggest international literary festival. Miguel is also an Academic Visitor at the Oxford Latin American Centre in 2020. He discussed the challenges facing him as he puts together a biography of Brazilian poet and art critic Ferreira Gullar, who won the Premio Camões (the Booker Prize of the Portuguese-speaking world) and died in 2016.

The hugely entertaining discussion covered both the genre of biography, such as the difference between a profile and a biography, and questions of methodology: deciding which elements to include/exclude and why; whether the process of writing about a person brings them closer to the writer, or distances them; the amazing resources available online, like digitalised newspapers; and the legal restrictions on biographical writing.

On the same day, a documentary was screened at the Department of International Development, with the participation of the director, Marilene Ribeiro. Her short film, Custos (Costs), from 2018, deals with the socioenvironmental impacts of dams in Brazil.

British-Brazilian Authors Yara Rodrigues Fowler and Luiza Sauma read from and talked about their work at Blackwell’s Bookshop on Broad Street, on Wednesday 5 February. The event was chaired by Dr Claire Williams.

“The authors read from their novels Stubborn Archivist (2019) and Flesh and Bone and Water (2017), which both reflect on the Brazilian immigrant experience in the UK. Their readings were wonderful, and during the Q&A session that followed they engaged the audience directly in a really stimulating back-and-forth, which had audience members, many of whom came from different migrant backgrounds, sharing and reflecting on their own experiences. The reflection on the intersection between migrant experiences felt quite profound.

I was particularly interested in the event, being myself a second-generation British Brazilian. It was the first time I had ever encountered writers – and I had search for them in the past! – writing from a similar background to my own.

It was exciting; a perhaps seemingly niche event that exemplified to me the possible breadth of experience encompassed in the study of Lusophone languages and cultures.” Thomas Dervan (St Hugh’s College), studying Portuguese and Italian. 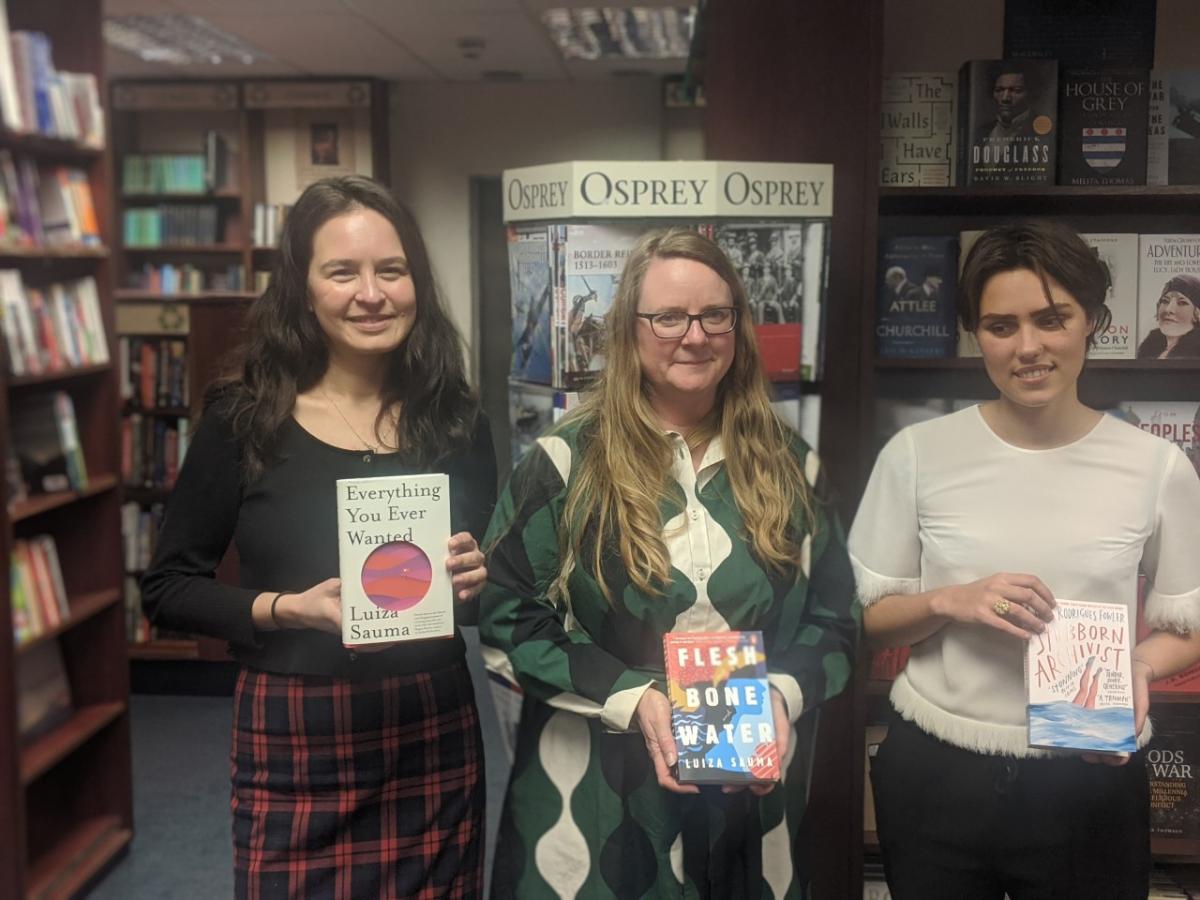 Three events took place during the Thursday of Brazil Week. Yanomami Scholar Davi Kopenawa and his son participated in a Round Table with scholars from across the University of Oxford on the topic of ‘Art, Science and Diplomacy for a Plural World on a Challenged Planet’. The speakers, whose disciplines ranged from anthropology to particle physics, debated projects of ‘enlightened localisms’ that call for new ways of thinking about world civilization, taking inspiration from Kopenawa’s co-authored book The Falling Sky. It became more than clear during the discussion how much scientists and scholars can learn from the indigenous people of the Amazon region.

Later in the afternoon, a ‘Book Round’ was held at St Antony’s College. Current and former researchers on the Brazilian Studies Programme (Latin American Centre) presented their new and forthcoming books, including: Vulnerable Men: Political Ambition and Resistance to Gender Quotas in Latin America, by Malu A. C. Gatto; Cybersecurity Governance: States, the Military and Digital Space, by Carlos Solar; The Politics of Memory: Urban Cultural Heritage in Brazil, by Andreza A de Souza Santos; and From Dilma to Bolsonaro: democracy, institutions and the populist threat in Brazil, by Marcus Andre Melo and Carlos Pereira.

The last event was the Latin American Centre’s Brazilian Studies Programme Annual Conference, also held at St Antony’s. This year, the theme of the conference was ‘Informal Practices in Brazil: Exclusion and Privilege’ and the panels discussed ‘The place of informality: locating informal practices in growing cities and shrinking economies’, ‘Imagining justice: selective punishments and omissions’, ‘Politics and self-censorship’. The keynote speaker was Brodwyn Fischer, Professor of Latin American History at the University of Chicago.

Financial support was gratefully received from the Faculty of Medieval and Modern Languages, University of Oxford.