Your Stories: A Galician Idyll 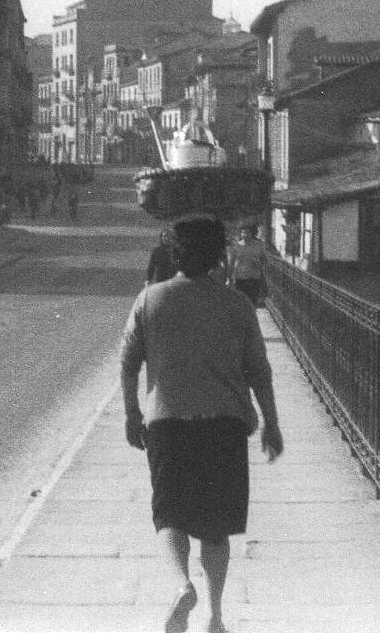 Galician housewife bearing her burden on her head

Orense, July 1957, market day. I awoke to the sound of braying donkeys and the sight of housewives carrying their purchases in baskets on their heads. Engaged to teach English at the Escuela de Comercio, I had arrived at Orense by train on the very day that General Franco opened a new rail link from there to Santiago. No wonder a security official gave me a grilling about the purpose of my journey!

My stay had been arranged by the university’s Spanish Lector (the poet José Angel Valente). Each weekday evening I ran classes for beginners and for more advanced students. This novel but enjoyable experience left me plenty of free time for meeting people and exploring as well as for private study.

The avuncular director of the school, Don Ernesto, was also the manager of the Hotel Parque. I stayed at a modest pensión, where fellow residents were Jacky, who was teaching French at the school, and Pepe, a soldier at the local garrison. A succession of guests joined us, making for interesting conversation. One evening two men arrived furtively on a scooter: a dissident Portuguese academic who had escaped from detention and a flamboyant Andalusian, paid to smuggle him into France.
Sometimes after lunch Jacky and I would go over to the hotel for coffee and a game of escoba with Don Ernesto and his circle. Among them were his brother-in-law the painter Prego, the sculptor Faílde, the writer Antonio Risco and Virgilio, another painter. Virgilio’s mural portraying aspects of Galician life adorns the concourse of the railway station. He also played the gaita and invited me to a rehearsal of the folklore group. The soprano’s ‘grito de alegría’ at the climax of one dance is an abiding memory.

I met only two English people during my stay: a Metro-Vick engineer who showed me over his hydro-electric project, and a globetrotting authoress, with whom I had tea at the hotel (she had brought her own tea-infuser).

On the Noche de Santiago a pupil took me to see the traditional festivities. The mock façade of a Moorish palace had been constructed in front of the cathedral and from the opposite side of the main square, above the heads of the crowd, a ball of fire was hurled into the palace, which erupted into fireworks and flames. When these subsided the cathedral was illuminated, symbolising the Reconquest.

I travelled home from Vigo to Tilbury on one of the last Royal Mail sailings across the Atlantic. Among the other passengers were young people from Argentina returning to their boarding schools in England. We had a jolly time on the last night, dancing the conga all through the ship.

So ended an enchanted interlude in my life. I was very privileged to have seen Spain before the advent of mass tourism. By an extraordinary coincidence, a generation later a neighbour’s daughter went on a school exchange to the very same town, but her experience in post-Franco Spain will have been totally different.