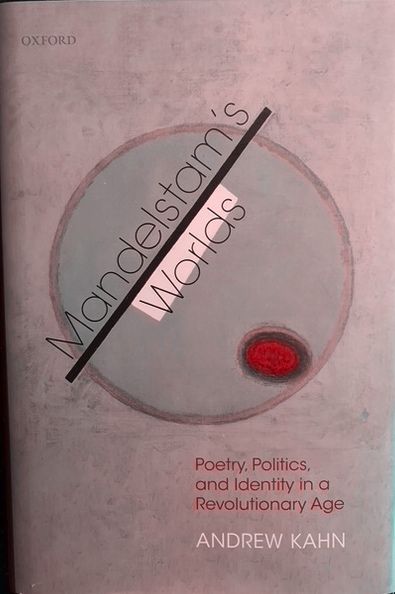 Congratulations to Professor Andrew Kahn on the publication of his book, Mandelstam’s Worlds.

Andrew says: ‘Osip Mandelstam is one of the greatest European poets of the twentieth century. Born in Poland, as an infant he moved with his family to Russia. He was educated at the same school as Vladimir Nabokov, published his first collection of poems before the Revolution, and died after a period of exile under the Stalin regime in 1938. His works were banned from that time. He achieved prominence from the 1970s in the West owing to translations into English, French, and German and the sensational success of his widow Nadezhda Mandelstam’s memoir, Hope Against Hope. I first read about him before I learned Russian on reading Nightingale Fever (1981) a moving popular study by Ronald Hingley, an Oxford Russianist. Mandelstam was traditionally seen as a hermetic or difficult poet, aloof from his times and nostalgic for pre-revolutionary culture, a highly allusive poet whose work was made solely from literature. This book proposes a comprehensively new approach to Mandelstam. Through close consideration of his literary and cultural journalism, it re-situates him in the political, cultural, artistic, and social contexts of Soviet Russia. He emerges as an engaged participant in the literary politics of the new state, a writer adept at eulogising Lenin as well as writing filmic poems featuring Charlie Chaplin as an alter ego. The book shifts critical emphasis away from his early poems to the masterpieces and neglected lyrics of the 1920s and 1930s, exploring the considerable innovations in his poetics over the period and their experiential modes of seeing the world and being in it. These are Mandelstam’s worlds and they include the visual (painting and film), the historical/utopian, the intimate (feminine and masculine), and, finally, the transcendent.’