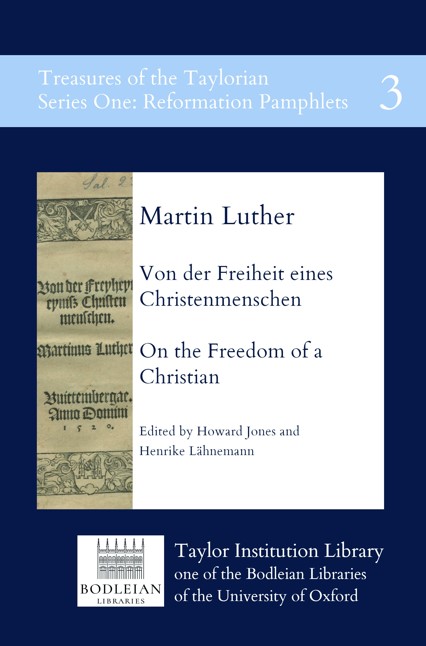 On the 500th anniversary of its publication, this new edition of Martin Luther’s seminal work On the Freedom of a Christian combines the first English translation of the German version with a historical and linguistic introduction based on the Oxford copies of the work.

This volume takes a new collaborative approach which makes use of digital methods to combine book-historical studies, digital editing, and linguistic analysis. The edition is based on four copies of the work, three in German and one in Latin, held in Oxford in the Taylor Institution Library. The first edition, Taylor Institution Library Arch. 8° G. 1520(25), printed by Rhau-Gruneberg in Wittenberg, forms the basis for the present volume, which for the first time includes an English translation of the German, rather than the Latin version of the pamphlet. The text and translation are offered with extensive explanatory footnotes, and the relationship between the German and Latin versions is explored in a chapter by Howard Jones, who puts forward new, linguistic arguments, that the German version was written first. Other chapters include: an introduction to the historical and philosophical background to the text by Dennis and Hannah Clemens, translated by Florence Butterfield and Raluca Vasiu; a history of the four copies in the Taylor Institution Library by Maximilian Krümpelmann; and a guide on how to read Reformation pamphlets from the facsimile by Henrike Lähnemann.