I work on early modern literature, culture and political thought. My first book was on tragedy (especially Pierre Corneille) and theories of political action, and I continued this conversation between theory and theatre with a coedited volume thinking through Walter Benjamin’s concept of the Trauerspiel and its relevance to a French corpus.  In my second book, Compassion’s Edge, I worked with a broader range of genres, exploring the affective undertow of religious toleration. The book explores the language of fellow-feeling – pity, compassion, charitable care – that flourished in the century or so after the Wars of Religion. It’s a gloomy sort of account: this is not a story about compassion overcoming difference, but rather about compassion reinforcing divides. The project was supported by a fellowship at the Radcliffe Institute for Advanced Studies at Harvard.

I continue to work on early modern affect but am also beginning a very different third book – Liquid Empire – on the writing of water in early modern France and its territories, from the Pléiade poets of the sixteenth century to the Mississippi settlements of the 1700s. The project takes up the figure of the riverain to think through how river writing shapes a poetics of resource and residency, from the poet to the washerwoman, the Indigenous canoeist to the Versailles nymph. I’ve carried out research for the American tributaries of this work as a visiting fellow at the John Carter Brown library in Providence (where I’m co-curating an exhibition on water in the Americas) and at the Library Company of Philadelphia.

I teach Trinity undergraduates across the first-year Prelims course in French, and in second and final years teach sixteenth and seventeenth-century material (Papers VII and X) and various optional papers (Paper XII). I also teach translation into English. I lecture on a range of early modern topics: this year I will be taking up discussions of gender in early modern women’s writing across various genres. I’m committed to dialogues between early modern writing and critical theory, broadly considered, and that dialogue is very much at work in my teaching practice.

At the postgraduate level, this year I’m teaching on the Renaissance and Baroque option. I welcome applications from prospective DPhil students working on early modern French writing, and especially those interested in prose fiction, emotions and affect, the Americas, and the environmental humanities.

“Faking It: Affect and Gender in the Essais.” Forthcoming in Montaigne Studies, special issue on affect, edited by Todd Reeser

I was educated at a comprehensive school in west London, and then read English and French at New College, before leaving for California where I got my PhD in French from UC Berkeley. My first job was at the University of Michigan; I came back to the UK in 2009 to teach at University College London, before moving to Oxford in 2017. 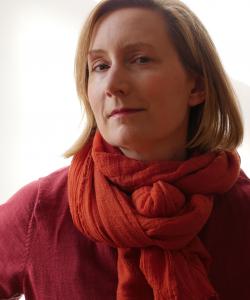