Serena Vandi’s research focuses on the Italian modernist writer Carlo Emilio Gadda, particularly on his anti-fascist works and his use of satire. Her project, ‘Gadda: Fascism, Satire and Truth’, has a two-fold aim: firstly, to investigate and reassess Gadda’s relationship with fascism, building on the recent publication of the original uncensored version of his main anti-fascist work, Eros e Priapo; secondly, to investigate the more general relationship between power, satire and truth.

Serena has worked for many years on Dante Alighieri and Gadda, coming to a thorough reassessment of the traditional way of interpreting the relationship between these two cornerstones of Italian literature. This work has resulted in the monograph Satura. Varietà per verità in Dante and Gadda (Milan: Mimesis, 2021). With a comparative approach, she has made use of the category of ‘satura’, in order to identify the relationship between ‘variety’ and ‘truth’ as a fundamental structure in the works of Dante and Gadda, thus offering a reflection on some general matters in literary criticism, in particular on the relationship between the formal structure of the text and its ethical-gnoseological potentiality.

Serena Vandi studied in Bologna, where she obtained her B.A. and M.A. in Italian studies and where she was a student of the Collegio Superiore. She then worked as a museum curator, a proofreader, an organizer of language and career events for students at the University of Bologna, and a secondary school teacher of Italian and History.

In 2019, she obtained her Ph.D. in Italian studies at the University of Leeds, with the thesis ‘Satura: varietà per verità in Dante e Gadda’ (‘Satura: Truth through Variety in Dante and Gadda’), which has been converted into a monograph. At the University of Leeds, as a Ph.D. student and then as a LAHRI Short-Term Postdoctoral Fellow, Serena taught Italian language and literature at all levels, especially Dante and Italian crime fiction, and she worked as a Research Culture intern. She was a member of the ‘Leeds Centre for Dante Studies’ and of the interdisciplinary research group ‘ItaLeeds: Researching Italy from Leeds’. 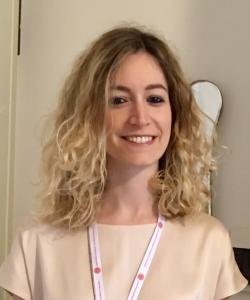