Women in German Studies is a professional organisation for Germanists in Great Britain and Ireland which was founded in 1988 by Helen Watanabe-O’Kelly, Professor Emeritus at the Faculty of Medieval and Modern Languages. From 22 to 24 June 2017 the conference will come to Oxford for the first time, to explore the topics ‘reform’ and ‘revolt’ across German history, literature and culture. (Call for papers)

Germany does not have a strong reputation when it comes to revolution. Neither the ‘Märzrevolution’ of 1848 nor the start of the Weimar Republic have ever acquired the iconic status of the French Revolution, for example. It is different with the term ‘Reformation’, however: the quincentenary of the publication of the 95 theses by Martin Luther is a timely reminder of the potential for change and questioning in German history — and even more in culture and literature. The 2017 Women in German Studies Open Conference aims to explore the broad potential of the two wider concepts linked with the themes of revolution and reformation, by looking at reform and revolt, both as significant aesthetic categories and as thematic ones.

Proposals are invited from scholars working in areas from the Carolingian Reform of the 8th century to 21st-century protest movements, as well as from all areas incorporating an interdisciplinary approach to German Studies. Especially welcome are contributions which look specifically at how women as writers and movers interact with reform and revolt. This might be in the way that Argula von Grumbach (pictured below) argued in the context of the Reformation against the University establishment, which tried to silence protest, how Christine Brückner voiced protest at the invisibility of women in history via the ‘Ungehaltene Reden ungehaltener Frauen’, or the contribution of the German-speaking countries to the global women’s marches against President Trump. It can equally be the civic engagement of female activists, or looking at ‘Rechtschreibreform’ and gender-neutral language in the collective new translation of the Bibel in gerechter Sprache.

The conference is open to members and non-members, male or female. Registration will start in April; if you would like to propose a paper of c. 20 minutes duration on the conference theme in either English or German, please send your abstract (c. 150 words) to Henrike Lähnemann (henrike.laehnemann@mod-langs.ox.ac.uk) by Thursday 2 March 2017. 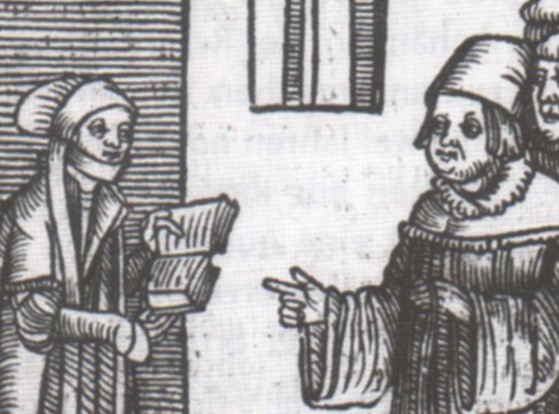