The contemporary German poetry scene is amongst the most exciting and influential in the world, but until recently has been largely inaccessible to English-speaking audiences. Since 2014 the MMP project, led by Professor Karen Leeder, has been enabling deeper engagement with German poetry, making it available in new spaces and to new audiences in the UK and elsewhere. 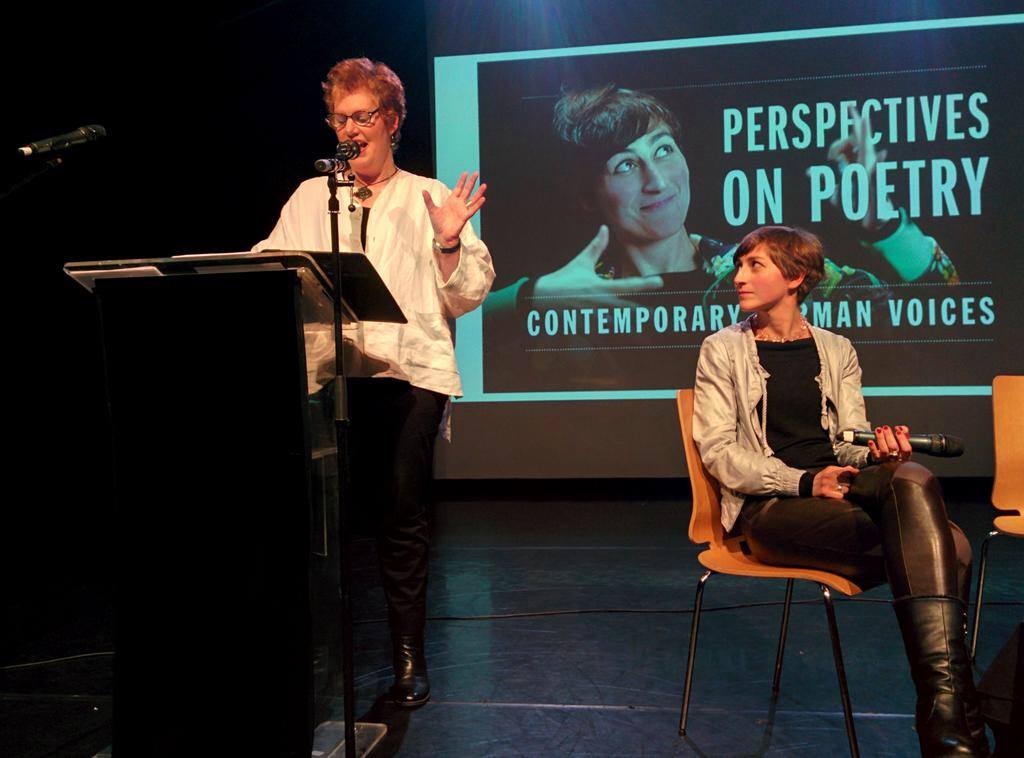 Karen Leeder and Ulrike Almut Sandig at Rich mix, courtesy of Poet in the City

Leeder says: ‘‘People are often scared of poetry… and of the German language. ‘But modern German poetry has so much to offer – including unique insights into German feeling, culture, history and experience, which help us better understand these aspects of ourselves and our shared European past and future.’

MMP started when an Oxford University Knowledge Exchange Fellowship allowed Leeder to build on her research interests (including post-war German poetry and 20th Century Austrian poet Rilke), and partner with the Southbank Centre on a series of public engagement events. Sold-out workshops and performances explored Rilke’s impact on Anglo-American culture and bought together some of the biggest names in English- and German-speaking poetry to discuss his impact on their work.

Since then, MMP has literally taken the poetry out ‘on the road’ with activities – including poetry duels, masterclasses, readings and roundtables – which have toured the English regions, Scotland, Wales and Ireland, Europe, Australia and India. The project has produced podcasts, radio programmes, films and prize-winning translations, has had a presence at all the major UK poetry festivals, and presented at high-profile literary festivals, such as Cheltenham, Hay, and Edinburgh.

Partnering with a wide range of individuals and organisations, including Poet in the City, Modern Poetry in Translation, and numerous spoken-word poets, translators, artists and film-makers, has allowed MMP to take poetry to people who would not normally seek it out. Approaches such as writing workshops and non-German speaking translations (in which participants take a literal translation of a poem and hone their own version of it in English), make the poetry accessible, relevant, and exciting.

Audience response has been hugely positive. One participant commented: ‘You’ve redefined the possibilities of poetry in our minds’. Others have described the activities as ‘electrifying’, empowering’, and ‘inspiring’. Most recently, MMP has gone into secondary schools in London and Oxford, showing young students the potential of both poetry and German.

MMP has also influenced literary practice, inspiring the development of new works and translations and creative responses to fellow writers. Ulrike Draesner, an established German writer, wrote two books that arose directly from her time as Writer in Residence with MMP in Oxford. Exchanges between Jan Wagner, Don Paterson, Sujatta Bhatt and Patrick McGuinness have resulted in creative dialogue and developed into productive ongoing relationships.

Leeder is passionate about the benefits of sharing research outside academia, for both the public and the university. She says: ‘MMP has brought German poetry to new audiences and inspired new work. But there have also been clear benefits for researchers who have developed new areas of investigation, for instance on spoken-word poet Ulrike Almut Sandig, whose work I have translated.’

‘For me personally, it has brought new ideas into my teaching, driven people who’ve heard me on the radio or in workshops towards my books and papers, and opened up new themes for my research. Research can’t be a static thing. Making it public-facing allows it to breathe, take on new influences and stay relevant and dynamic.’