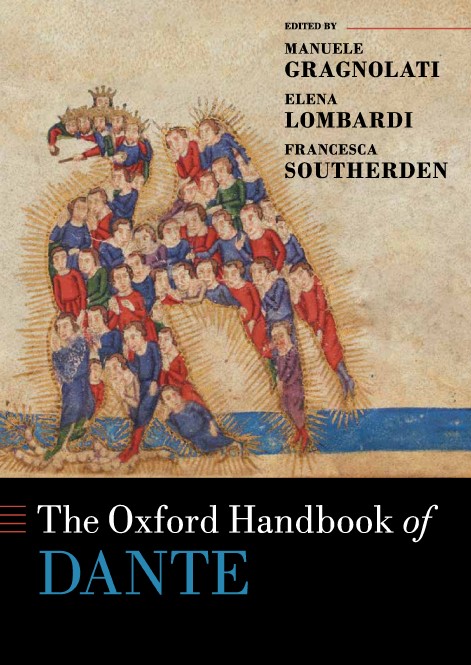 We are delighted to announce the publication of The Oxford Handbook of Dante, co-edited by Manuele Gragnolati (Sorbonne Université/ICI Berlin), Elena Lombardi (Oxford), and Francesca Southerden (Oxford).

The Handbook is both tightly connected to Oxford and international. It has come out of a long-standing collaboration between the editors and continues in a similarly collaborative, dialogic, and plural mode. It contains forty-four specially written chapters that provide a thorough and creative reading of Dante’s oeuvre. It gathers an intergenerational and international team of scholars encompassing diverse approaches from the fields of Anglo-American, Italian, and continental scholarship and spanning several disciplines: philology, material culture, history, religion, art history, visual studies, theory from the classical to the contemporary, queer, post- and de-colonial, and feminist studies. The volume combines a rigorous reassessment of Dante’s formation, themes, and sources, with a theoretically up-to-date focus on textuality, thereby offering a new critical Dante. The volume is divided into seven sections: ‘Texts and Textuality’; ‘Dialogues’; ‘Transforming Knowledge’; ‘Space(s) and Places’; ‘A Passionate Selfhood’; ‘A Non-linear Dante’; and ‘Nachleben’. It seeks to challenge the Commedia-centric approach (the conviction that notwithstanding its many contradictions, Dante’s works move towards the great reservoir of poetry and ideas that is the Commedia), in order to bring to light a non-teleological way in which these works relate amongst themselves. Plurality and the openness of interpretation appear as Dante’s very mark, coexisting with the attempt to create an all-encompassing mastership. The Handbook suggests what is exciting about Dante now and indicate where Dante scholarship is going, or can go, in a global context.

A series of lectures, called ‘Decentring Dante’, will take place at the ICI Berlin Institute for Cultural Inquiry, celebrating the publication of the Handbook. The lecture series will suggest ways of reading Dante’s Comedy from a less central position and with a broader, more critical perspective. How can discussions of race in the Middle Ages and the attentiveness to indigenous forms of knowledge preservation help literary scholars to rethink their understanding of ’canonicity’ and the ’canonical‘? On what basis can canonical authors such as Dante, Chaucer, and Christine de Pizan continue to be read today? In what sense and at what cost can Dante inspire other poets? What does he mean, more specifically, to a woman writer and artist in Jamaica? What changes when Dante’s Virgil is read not only as part of the Christian reception of classical authors in the Middle Ages, but also in dialogue with the practices of ancient pedagogy? Does the queer desire informing the Aeneid also flow through Dante’s poem?

The first lecture, given by Suzanne Conklin Akbari (Professor of Medieval Studies at the Institute for Advanced Study, Princeton) on the subject of ‘What Ground Do We Read On?’ will take place on Monday, 10 May. This will be followed by a second lecture, ‘Going Through Hell’, by Lorna Goodison (Poet Laureate of Jamaica and Professor Emerita at the University of Michigan) on Wednesday, 12 May, and a third by Gary Cestaro (Professor of Italian at De Paul University) on the subject of ‘Dante’s Queer Father’s on Monday, 7 June. All lectures will begin at 19.00 CET.

Presentations of the Handbook are also planned in Oxford and Paris for later in the year.