Danse Macabre by Michael Wolgemut (1493), from the Nuremberg Chronicle of Hartmann Schedel 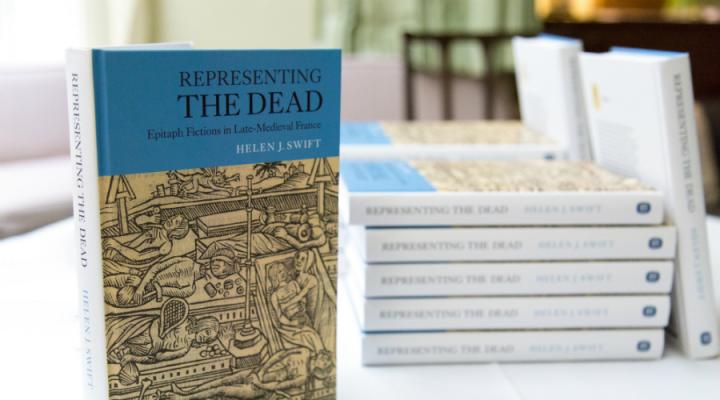 Copies of Representing the Dead by Helen Swift © Boydell & Brewer

The title has been commended in the Society for French Studies R. Gapper Book Prize competition, as a runner-up for the best book published in 2016 by a scholar working in French Studies in Britain or Ireland. For more information about the competition, please, see this article.

What prompted you to write on the topic of death?

Intellectual serendipity! It was January 2014 and I’d just started a period of sabbatical installed in a studio in the 14th arrondissement in Paris. I received an email from my medieval French colleague asking me what topics I wanted to lecture on the following year. To brainstorm some ideas, I wrote the word ‘death’ in the middle of a piece of paper; the page got fuller and fuller, my brain got more and more excited, and one thing led to another… The next day I was renewing my Bibliothèque nationale membership and reading my first text, George Chastelain’s Temple de Bocace, which became the lynchpin of Chapter 3.

So, could we say that the book was written in the shadow of Montparnasse Cemetery?

Ha – that would make for a nice story, wouldn’t it? The cemetery was located just around the corner, but it would be more accurate to see me passing beneath it every day, on the Métro, on my way to and from various libraries, where I did most of the primary reading and manuscript research for the book. Time to read and think is very precious, and sabbatical gives you the space to do so deeply and sustainedly, which is what you need in order to generate something of book-length scope.

To brainstorm some ideas, I wrote the word ‘death’ in the middle of a piece of paper; the page got fuller and fuller, my brain got more and more excited, and one thing led to another…

After two months, I returned to Oxford and started drafting chapter plans; I was very lucky – serendipity again? – in that everything fell into place quickly. I had to hold myself back from starting to write properly until I’d got clear plans in place – it was such fascinating material that I wanted to start processing my thinking and communicating it in my own words as soon as possible. 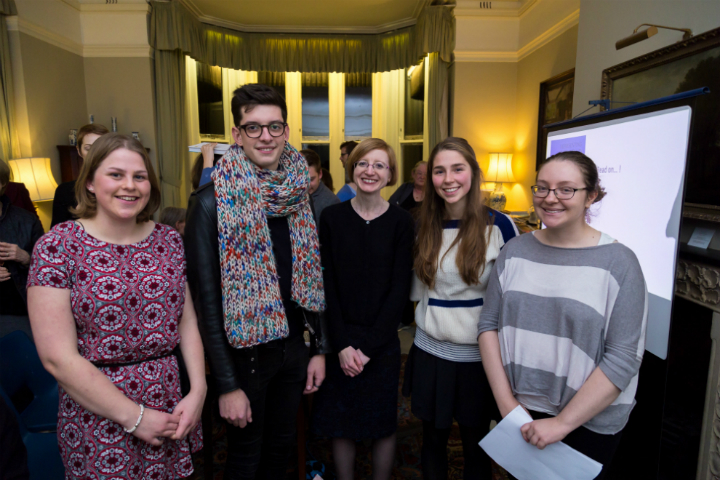 What makes the material so fascinating?

I think a lot of the texts have had their interest underestimated or incorrectly framed. What I’m looking at are literary works (prose, verse, prosimetra) from the early fifteenth to the early sixteenth centuries, and the ways in which writers exploit the capacities of imaginative fiction to experiment with representing the dead – so you get paradoxical corpses who speak whilst decapitated or walk whilst dismembered, or you find first-person epitaphs that don’t so much state the deceased’s identity as set up a riddle about who they are.

Many of these texts have been done a disservice in being viewed predominantly through a moralising lens. Whilst it’s true that there is nearly always some kind of didactic message being relayed, that isn’t a restrictive feature – it doesn’t mean that the text should therefore be treated with solemn seriousness or that didacticism precludes narrative play. Weighty topics can be addressed with lightness of touch, and the representation of the dead can also be comic! 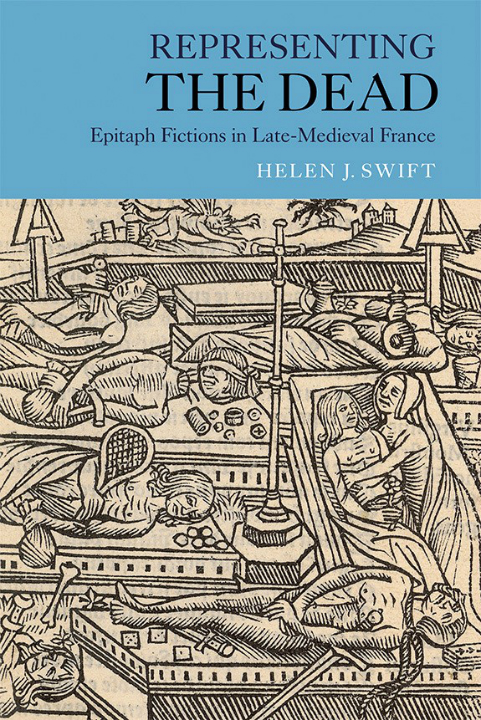 The cover of the hardback edition of Representing the Dead (2016).

There have been many books on death in medieval literature; what’s distinctive about yours?

There is a rich critical literature on death across the whole medieval period, though the fifteenth and early sixteenth centuries are still less represented. I wanted to do two things with the book. Firstly, my aim was to bring together a range of texts that aren’t usually considered between the same covers; on the surface, they’re more or less obviously ‘about death’, but when read more probingly they animate a shared set of conceptual questions about representing the dead.

You get paradoxical corpses who speak whilst decapitated or walk whilst dismembered, or you find first-person epitaphs that don’t so much state the deceased’s identity as set up a riddle about who they are.

Second, I wanted to focus on a certain set of questions pertaining to the relationship between death and identity: who am I when I am dead? I saw these writers to be keenly interested in using exploration of what constitutes posthumous identity as a way of raising broader issues about the nature of human selfhood and how it’s constructed. Whilst several of the texts have been studied as memorialising fictions concerned with fixing a stable commemorative image of the deceased, I felt that that approach had unduly tidied up what writers were wanting to say about identity, which is that it’s a messy entity. Their works consequently spotlight identity not as a product, a neatly packaged thing to be remembered, but as a process of composition that is itself a continual re-membering. 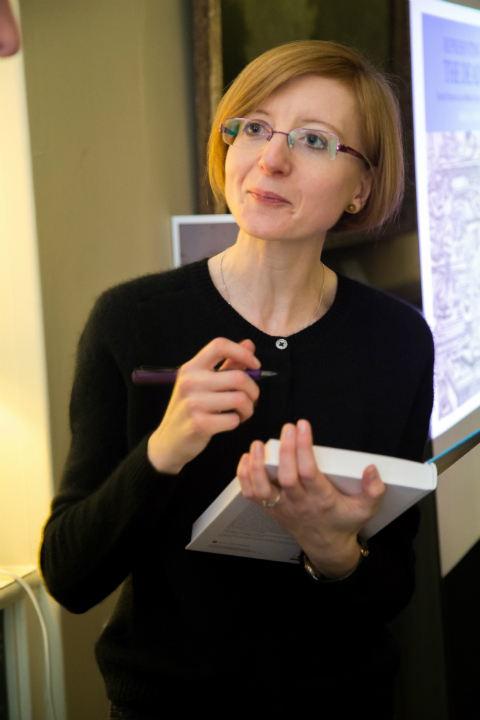 You use the phrase ‘epitaph fictions’ in the title; what do you mean by that?

This is the category term that I coined to define the shared concerns of my corpus’s texts: the construction and transmission of posthumous identity.

Some of them explicitly feature fictional epitaphs (whether for historical, mythical or fictitious characters). They introduce the deceased in the third or first person: ‘here lies so-and-so’ or ‘I am so-and-so’, and my book’s first chapter examines how writers probe the meaning and implications of such statements – for instance, evoking how ‘here lies’ raises the questions: what part of the deceased remains, in what form, and where? Is the most significant resting place for the dead the very text that composes the renown of their decomposing body?

Epitaph fictions also expose the specious unitariness of the statement ‘I am’, since no-one’s reputation consists of a single, univocal narrative; it is instead a competition between various threads which are unlikely to be under the sole narrative control of the speaking ‘I’.

I wanted to focus on a certain set of questions pertaining to the relationship between death and identity: who am I when I am dead?

Texts that I call epitaph fictions but which don’t include epitaphs nonetheless animate these same concerns through the fictional dramas that they stage, such as the ambulant corpses that I mentioned before, who typically address themselves to a narrator figure charged with transmitting their name and their story to posterity. These are individuals depicted dying to be told: their demise triggers the conversion of their life into a tale – their identity won’t so much be recorded in a text as constituted by it – and they are desperate for that transmission to occur on their terms.

Is this an interest you’ve shared with others here?

Death is a topic currently engaging several scholars in the French Sub-Faculty. Jessica Goodman and I organised a workshop last year, ‘Whither Death?’, and discussed in a podcast our aims for that project. We also collaborated on a stall for Oxford’s Curiosity Carnival about identity and legacy, ‘You Are What You Leave’. There will be more, I’m sure! 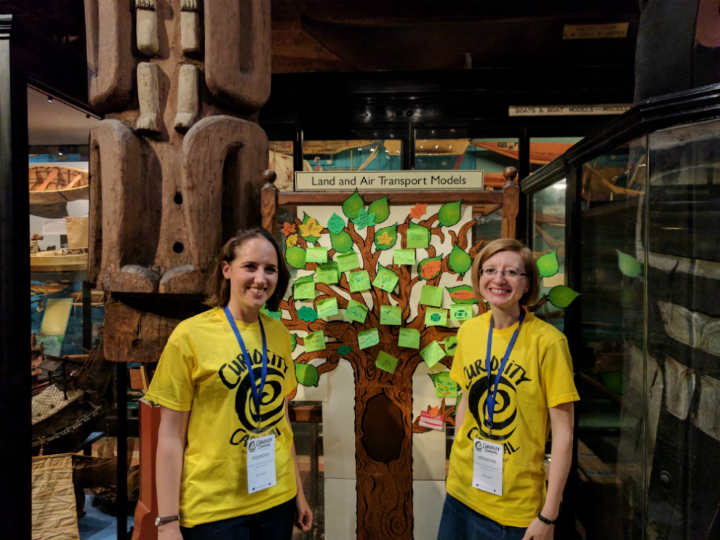 A version of this interview previously appeared in The Medieval Herald. Our thanks to Boydell & Brewer for their permission to reproduce the material.