Helen Swift’s research interests straddle the late medieval and early modern periods, looking at the poetics of vernacular literature between 1330 and 1550. Her work is interdisciplinary, in that it often involves visual studies of text-image relationships, as well as studying the history of the book in this period of transition between manuscript and print cultures. She also integrates critical theory into her work as a tool for opening up new perspectives on earlier literature to modern readers. Her first book examined the literary and rhetorical structures of literary defences of women written by men in the period after Christine de Pizan. Her second book looked at questions of identity construction and narrative voice in late medieval France through the lens of literary epitaphs, in response to the question: who am I when I am dead? It featured as a TORCH ‘Book at Lunchtime’ in October 2017, and was highly commended as runner-up for the Society for French Studies R. Gapper Prize 2017.

She enjoys working in several collaborations. She has, for instance, participated in the MARGOT project, based at the University of Waterloo, Canada, in the SIEFAR project ‘Discours sur l’égalité des femmes et des hommes’, and in a British Academy-sponsored group on ‘Text/Image Relations in Late Medieval French Culture’. She also co-ran, with Prof Sophie Marnette, a research group on ‘Voices in Medieval French Narrative’, funded by a British Academy Small Grant.

Recently, Helen collaborated with Dr Jessica Goodman on the topic of death, including a recent workshop hosted by TORCH under their headline ‘Humanities and Identities’ series: ‘Whither Death?’ Hear Jess and Helen’s podcast about the event. She also spoke at the 2019 Oxford Lieder Festival on ‘Who Am I When I Am Dead?’

Helen is happy to supervise topics on later medieval literature, as well as interdisciplinary dissertations (e.g. combining French and Art History, French and Philosophy) undertaken as part of the MSt in Medieval Studies. She has recently supervised doctorates on relations between poetry and philosophy in the Roman de la rose; on printed editions of the Rose; on reception in England of the idea of Jean de Meun, and on text-image relations in Christine de Pizan’s didactic works.

‘The Poetic “I” ’, in A Companion to Guillaume de Machaut: An Interdisciplinary Approach to the Master, ed. Deborah McGrady and Jennifer Bain (Leiden: Brill, 2012)

‘Haunting Text and Image: Having it Out with Misogynistic Authorities in the Late Medieval querelle des femmes ‘, in Haunting Presences: Ghosts in French Literature and Culture , ed. Kate Griffiths and David Evans (Cardiff: University of Wales Press, 2009), 29-42

‘Tamainte consolation / me fist lymagination: A Poetics of Mourning and Imagination in Late Medieval dits’, in The Erotics of Consolation: Desire and Distance in the Late Middle Ages, ed. Catherine E. Léglu and Stephen J. Milner (New York: Palgrave Macmillan, 2008), 141-164 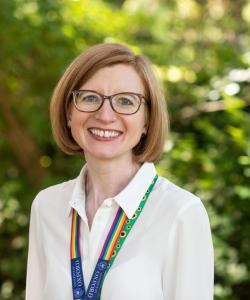