Professor of Russian Literature and Music

My most recent monograph is a short critical life of Tchaikovsky that explores the composer’s life within the context of nineteenth-century Russia’s evolving musical institutions (conservatoires, publishing, performance, and patronage). I have also edited Rachmaninoff and His World for the University of Chicago Press, part of my role as scholar-in-residence at the Bard Music Festival in summer 2022. I am currently working on an interdisciplinary study of the relationship between words and music in Russian culture from the late eighteenth century to the present day, with a specific focus on the literary, musical and cultural history of the art-song repertoire, as well as on aspects of opera too. I continue to be interested in the modernist prose writers of the early-Soviet period, particularly Andrei Platonov (on whom I wrote my doctorate) and Isaak Babel’.

My main areas of methodological expertise include theories of gender and sexuality, interdisciplinary approaches to the relationship between literature and the other arts, and the study of translation, reception and cultural exchange (with a particular interest in Russia, Britain, Scandinavia and Finland). I am a member of several international networks, including Writing 1900 (a research project jointly hosted by the University of Oxford and the Humboldt University in Berlin), the Study Group for Russian and East European Music (supported by the British Association for Slavonic and East European Studies), and the International Platonov Seminar. Since 2015 I have served as an elected member of the Academic Advisory Board of the Tschaikowsky-Gesellschaft, and together with Alexandra Lloyd and Laura Tunbridge, I co-convene the Oxford Song Network: Poetry and Performance at TORCH (The Oxford Research Centre in the Humanities).

Before coming to Oxford, I taught at the University of Wales, Bangor, and the UCL School of Slavonic and East European Studies. I have held British Academy Postdoctoral and Mid-Career Fellowships, and in 2007, I was Edward T. Cone Member in Music Studies at the Institute for Advanced Study, Princeton. I spent the academic year 2016/17 as a fellow of the Institute for Advanced Study in Paris, supported by a EURIAS Senior Fellowship. In 2009, I received both the Philip Brett Award of the American Musicological Society, and a Philip Leverhulme Prize for Modern Languages. Along with Julie Curtis and Rajinder Dudrah, I was a member of Oxford’s AHRC-funded Creative Multilingualism, as part of which I worked closely with the Oxford Lieder Festival. I particularly enjoy communicating academic ideas to a broader public, and have written and presented a number of talks and features on Russian literature and music that have been broadcast on BBC Radio 3, as well as contributing to a recent award-winning film documentary about Tchaikovsky. I have written programme notes and produced translations for various organisations, including Garsington Opera, Welsh National Opera,  the Royal Opera House, Stuttgart Opera, the Philharmonia Orchestra, the Oxford Lieder Festival and Wigmore Hall (recordings of talks I gave in association with Garsington Opera can be found here and here, and a full list of my collaborations can be found here).

In addition to teaching translation from and into Russian at various levels, I give lectures and tutorials on the full range of nineteenth and twentieth-century authors covered on the undergraduate course. I am particularly interested in interdisciplinary approaches to Russian literature, and have offered lecture series on ‘Russian literary classics on the opera stage’ and ‘Russian literature and the visual arts’.

I have supervised a number of graduate theses and dissertations, including studies of both Russian music and literature in interwar Paris, literary and political representation in late Imperial Russia, the representation and detection of crime in the novels of Dostoevsky and Zola, the role played by guitar poetry in Soviet film, Soviet translations of Shakespeare, the nineteenth-century Russian opera libretto, and the operas of Rodion Shchedrin. I also teach graduate courses on Russian modernism and theories of gender and sexuality in Russian culture. 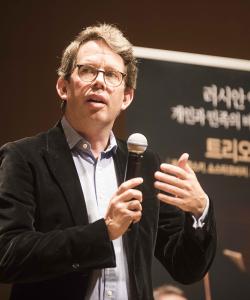