Simon’s research focuses on the history, literature, and the visual arts of the Portuguese-speaking world in the Early Modern period.

His first book, Poets, Patronage, and Print in Sixteenth-Century Portugal: From Paper to Gold (OUP 2021), examines how poets thought of themselves in professional terms and used poetry to negotiate their social status and financial success. In other words, it is a study of the various kinds of value (moral, social, financial) ascribed to poetry in the 1500s, a time of political, social, and technological change and a period when poetry’s worth (and that of its practitioners) was regularly contested.

Simon is currently working on two projects. One capsizes traditional triumphalist narratives of the ‘Age of Discoveries’ that have typically cast explorers as paragons of derring-do. Wreckers takes national heroes off their pedestals and introduces readers to lesser-known figures from across Europe whose stories challenge what we think we know about the emergence of empire. The book underlines how empire was not inevitable, taking disaster stories as a way of imaginatively ‘unlearning’ imperialism. A second project explores the use of art and material culture to articulate and justify Portuguese dominion in Africa, Asia, and South America, but brings to light how those plans to project Portuguese magnificence failed when coins were melted down, artisans made mistakes, and genealogists found bad apples in royal and noble family trees.

Simon is also interested in imaginative responses to literature, including translation and creative criticism.

He won the 2020 Juan Facundo Riaño Essay Medal for Hispanic Art History for a study of early Renaissance silverwork in Portugal, entitled ‘Chasing Wild Men (in Silver)’. The prize is awarded by ARTES with the support of the Office of Scientific and Cultural Affairs of the Spanish Embassy in London.

In 2019, Simon set up a new Early Career Network for Modern Linguists in Oxford to support the careers of and foster exchange between academics working across languages in the years soon after the completion of their doctorates.

He was the chair of the Oxford-Weidenfeld Translation Prize in 2019 and 2020.

Simon is responsible for students reading Portuguese at St Anne’s, Merton, New, and Lincoln. He gives lectures and tutorials on various aspects of Portuguese literature in the medieval and early modern periods, including prelims (paper IV) and FHS courses (papers VI, VII, IX, X, XII, and XIV), and teaches translation classes (Portuguese to English) at all levels.

In Trinity Term 2019, Simon was a Faculty Fellow at the Ashmolean Museum, developing a new course that explores how visual and material culture can challenge narratives of empire.

‘Marian Demotion: An Engraving of the Virgin and Child in Early Modern China and Problems of Cross-Cultural Translation’, Source: Notes in the History of Art, 39.4 (2020), 252–61

‘The Scribes of the Old Pillory: Hired Hands and their Custimers in Sixteenth-Century Lisbon’, in Literature, Learning, and Social Hierarchy in Early Modern Europe, ed. by Neil Kenny (Oxford: British Academy/OUP, 2022), pp. 241–57

Florbela Espanca, This Sorrow that Lifts Me Up, ed. by Cláudia Pazos-Alonso, trans. by Simon Park (Lisbon: Shantarin, 2022)

Helena Buescu, ‘Small Holocausts: The Devastation of the Self’, in Stephen Parkinson and Cláudia Pazos Alonso, eds, Reading Literature in Portuguese (Oxford: Legenda, 2013) 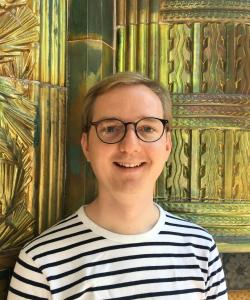