We are delighted to announce that the seventeenth R. Gapper Book Prize, given annually by the Society for French Studies, has been awarded to Professor Roger Pearson (The Queen’s College) for his book Unacknowledged Legislators: The Poet as Lawgiver in Post-Revolutionary France (OUP). In this work, Professor Pearson seeks answers to a number of fundamental questions and explores in depth the role of the poet:

What is the public value of poetry? How do poets envisage their own role and function within society? How do we? Do poets seek to shape public opinion and behaviour? Should they? Or do they offer alternatives ― perhaps sacred alternatives ― to political and religious ideologies? Are they what Shelley in 1821 called ‘the unacknowledged legislators of the World’? And what might that mean?

(From the press release for Unacknowledged Legislators: The Poet as Lawgiver in Post-Revolutionary France) 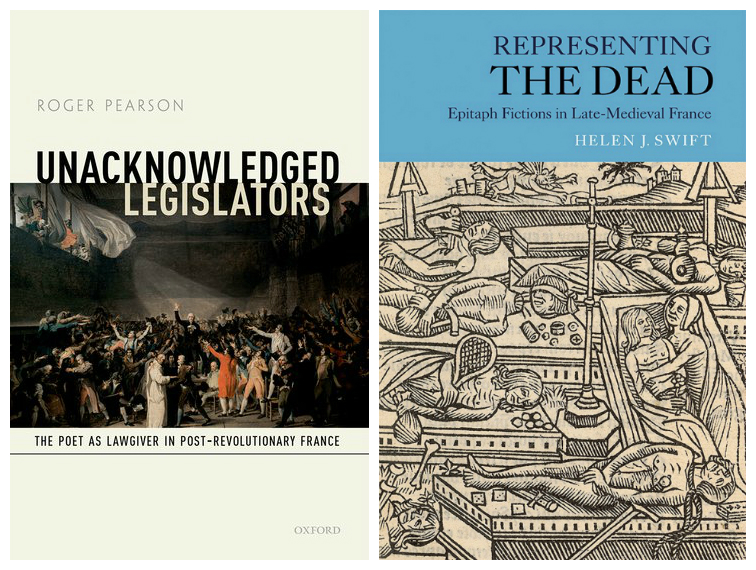 From left to right: Unacknowledged Legislators by Professor Roger Pearson and Representing the Dead by Dr Helen J. Swift.

Our congratulations to Dr Helen Swift (St Hilda’s College), too, for being commended for her book Representing the Dead: Epitaph Fictions in Late-Medieval France (Boydell & Brewer). Dedicated to the literary representations of the dead, this volume analyses works in prose and verse, and casts fresh light on the ideas of selfhood in medieval culture, as well as on contemporary conceptions of literary representation itself.